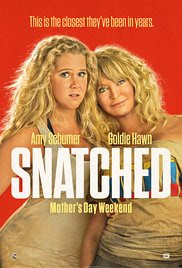 Snatched is now showing everywhere and is distributed by 20th Century Fox.

Snatched is the Mother's Day movie of 2017...and that is not a compliment.

As is the case with Christmas and Valentine's Day, Mother's Day provides an excellent opportunity for distributors to release an event film. Here, it is a film that is an excuse to have a girls day/night out for mothers and daughters to celebrate Mother's Day. That film this year is Jonathan Levine's Snatched, the film that's star power duo of Amy Schumer and Goldie Hawn is not enough to distract from the lunacy of the story and overpowering lame attempts of comedy.

The basis for Snatched isn't as ludicrous as the film itself. It shines a light on the tourists (especially women) being preyed upon by human traffickers when travelling in a foreign and unfamiliar country. Katie Dippold's screenplay combines this social issue with the age old theme of family reconnecting, with Schumer and Hawn playing polar opposite mother and daughter pair, Emily and Linda. Despite the dark undertones, the film plays to Schumer's strengths by being a comedy and making light of the situation.

Dippold's screenplay is incredibly disappointing. The path the story takes is ridiculously far-fetched with numerous inaccuracies (such as the locations and distances between them) and gaping holes (including Emily and Linda having all their belongings taken, but are somehow able to make phone calls and know all the numbers they need off the top of their heads). Snatched attempts to be not only funny, but also touching in that chick-flick kind of way...which it fails at miserably as there is nothing to be felt for any of the characters at any time besides irritation. 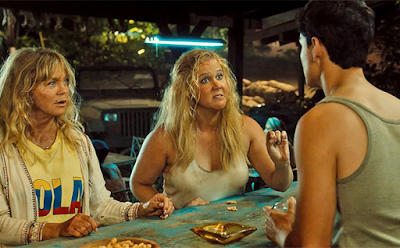 The first ten minutes are perhaps the best of the film before all goes downhill. The scene between Schumer and Randall Park (who plays her boyfriend Michael) indicates that there may be some great laughs to come with the witty, natural comedy employed in their conversation. The Facebook conversation between mother and daughter is also hilarious. However, once Emily and Linda arrive at their resort destination in Ecuador, the film takes an awful turn. The bright sparks of comedy we see in the first act fade dramatically.

Schumer's usually impeccable comedic timing is lost in this film, as it becomes uncharacteristically irrelevant and overly random (especially her tendency to include a crude sexual joke). As Schumer's last film, 2015's Trainwreck  was an incredible success, one can make the assumption that she works better with her own material and in a more urban setting rather than rural, as we see in the wilderness set Snatched. Her co-stars do little to lift the amusement of the film with Wanda Sykes and Joan Cusack portraying pointless characters, Ruth and Barb and Ike Barinholtz's Jeffrey being painstakingly unfunny. In what is Goldie Hawn's first film in 15 years, her performance isn't particularly memorable and it seems as though she coasts through it a little too easily.

Snatched is a terrible attempt at comedy that relies purely and unsuccessfully on the star power of Amy Schumer and Goldie Hawn to make any sort of an impact.