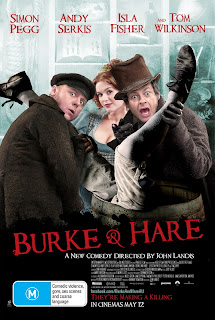 In My Own Words
Well, what an intriguing yet disturbing story we have here! "Burke And Hare" gives us the story of two men who make a living out of providing corpses to the world famous medical school in Edinburgh in the early 1800's. The beginning of the movie states that it is in fact a true story...apart from the parts that are not true. So there is only one thing I can do, find out what part is true! Well, obviously the comedy part isn't true. At least I think so anyway. William Burke was actually married at this point in his life, but he arrived in Scotland alone after their seperation. He did fall in love with and live with a prostitute by the name of Helen McDougal. As far as I can tell, she did not appear in an all female version of "Macbeth".

There is a difference as to what happened at the end of the film compared to what actually happened in real life. I have to watch what I say here as it is a major spoiler if I say too much. There is truth in what happens to one of the pair, but not with the other. One of them we definately know what happened to them and the other is fiction. The ending in the film for this piece of fiction is rather glorified. You know, this is entertainment though. Fiction is far more exciting that what really happened. What really happened to this half of the pairing is actually unknown, so anything is more exciting than that! However, it may interest you to know that in Greyfriars Cemetary, there was a terrier who sat on the grave of his soldier master guarding it. Yet again, Bobby the terrier did his guarding in the 1850's onwards, while this movie is set in the 1820's. There is actually a statue of Bobby at Greyfriars!

Otherwise, as far as I can tell everything else is true! It is a rather disturbing story, but you have got to love a black comedy! Well, I do anyway. Give me a black comedy over a crude comedy any day!

Review
When William Burke and William Hare took part in a business venture which involved murder for profit, it is very unlikely that it would have crossed anyone's mind that one day they may be able to laugh at this. However, time has allowed this to happen. "Burke And Hare" is the recreation of one of Scotland's most notorious crimes as a black comedy. It is a unique mix of fact and fiction with streaks of hilarity throughout the film.

William Burke (Simon Pegg) and William Hare (Andy Serkis) are two Irishmen living in Scotland who are down and out on their luck and flat broke. When one of Hare's tenants who lives in one of the rooms he and his wife rents out dies, Burke and Hare profit from his death by selling his body to Dr Knox (Tom Wilkinson), who uses the bodies for autopsies at his medical school in Edinburgh. As fresh corpses are hard to come by Knox offers them a substantial amount of money if they bring him more bodies. Burke and Hare do all they can to find more bodies, which includes murder.

For the most part, "Burke And Hare" is a very good historical film. It is interesting the way the story is retold and very  cleverly written so as to make a serious situation funny. The biggest downfall of the film in that it does slow down considerably in the middle and get quite boring. This leaves you wondering whether the film is going anywhere at all, because it feels as though it is just stuck in a rut in the middle with nowhere to go.

However, there really are some very funny scenes and it has one of the funniest sex scenes you will ever see. One particularly strange thing about the script is the use of the narrator. The narrator is only around for the first five minutes of the film and again for the last five minutes. There really doesn't seem any point to having this narrator as he doesn't seem to be relevant to the story at all and his narration doesn't add anything to the movie.

The recreation of Edinburgh in the early 1800's is definitely commendable. There is a feeling of dread in the city and the dark feel adds to the mood of the film. There actually are some quite picturesque images of Edinburgh Castle. On the other hand, there are some vile images of corpses being cut open so one must try to leave there stomach outside.

The thing about the characters in this film is that you are made to feel a way about them which would have been completely ludicous in the time which the crimes were actually committed. The audience is actually made to feel sorry for Burke and Hare and see's them as the good guys rather than the bad guy's which history says they were seen as. Simon Pegg's Burke is the more likable of the two with the way he falls in love and feel's that he has to keep doing what he is doing to support his girlfriend. The audience feels sorry for him and has a real connection with him. Pegg is very good as Burke and the persona he creates and relationship his character forms with the audience is very good. Serkis is very funny in his role as Hare, but it is Pegg who steals the limelight from him. Isla Fisher is quite funny as Burke's love interest, Ginny. It is actually her funniest and most likable role in years.

John Landis has done well after his long hiatus from feature length films. "Burke And Hare" is well made and very interesting to watch. It is great to see such a creative stance taken where fact it taken and looked at from a different perspective to see things as they have never been seen before. It is not thrilling or consistantly riveting, but has the right foundations to support it through the dull times.
7/10