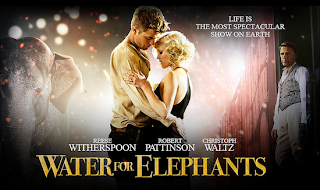 In My Own Words
I have actually had a close encounter with Reese Witherspoon. Well, not close in that I have met her or touched her...but I have been in the same room as her! I was lucky enough to be in the audience at a filming of "Jimmy Kimmel Live" in November 2008 when she was on to promote "Four Holidays" (otherwise known as "Four Christmases"). It was a stroke of luck to see her really, because she was supposed to appear the night before. I hadn't even realised that Witherspoon had to change to the night I would be going until I was strolling down Hollywood Boulevard during the day and there was the sign! She was lovely. I was very impressed at how down to earth she was. She raved about her children and all of the animals they own on their property. Witherspoon even rattled off all the names of her geese, chickens and pigs! It was so nice to hear her lovingly talk about her life away from Hollywood. I am sure that with her love of her farm animals she would have loved doing this film considering she got to work with horses and the elephant!

The bottom line is definitely go and see "Jimmy Kimmel Live" on Hollywood Boulevard if you are there, because it is basically the only place in Hollywood where you are guaranteed to see celebrities!

Review
The film maker who decided to adapt Sara Gruen's bestseller "Water For Elephants" was always going to have a winner on their hands. The picture you paint in your mind with the idea of a love story in a travelling circus in the 1930's conjures up glamorous images of women in sequined costumes and all sorts of exotic animals. That's exactly what the Franis Lawrence directed "Water For Elephants" is. It is a visual delight which is entertaining, moving and suspenseful.

Jacob Jankowski (Robert Pattinson) has the world at his feet when he is just about to graduate from college in veterinary science when his parents are killed in a car accident and he is left without a home. By accident, he ends up on the same train as a travelling circus, which needs him about as much as he needs them. As the new circus vet, he comes to know the ringleader, August (Christoph Waltz) and his beautiful wife and star, Marlena (Reese Witherspoon). August has an aggressive streak, which becomes even more evident when Rosie the elephant is introduced to the show and when Jacob falls in love with Marlena.

"Water For Elephants" is incredibly moving and really a beautiful film. There hasn't been many circus movies in recent times and this is definitely the best one in decades. There are some scenes in the film which some people will find quite disturbing and shocking. Yet the fact that we do take these moments in the film so to heart is because the mixture of images, musical score and the cinematography enhances all of our senses to experience what is going on in the film with the characters. The film is actully nail-biting in many scenes and you know the ending could go one of two ways, but there is no disappointment and no sense of predictability.

The images in this film are magic. The way in which all the animals appear on screen is beautiful and loving. Although the brutality of life with a travelling circus is talked about, the brutality even depicted by Lawrence is still in its own way quite beautiful.  The cinematography and editing for the big top scenes are exquisite. The musical score and sound effects all add towards the emotion of each scene and the score for the scenes with Rosie are particularly good.

One of the best things about this film is that the character development is brilliant. Each of the three lead characters have so much character to them and they make so much of an impression on you that you really do take them with you when you leave the cinema. Robert Pattinson's does well in the lead as Jacob, yet he seems to have the least dialogue out of the three main characters. Pattinson relies more on his facial expressions to show how he feels , which works but there isn't any scene which really stands out for him. However, it is great to see Pattinson smile a great deal more in this film than he usually does!

Reese Witherspoon is just beautiful. She is perfect in this role and shines every moment she is on the screen. Credit must also be paid to her for all the tricks she had to do with the elephant and the horse. Christoph Waltz is also fantastic. He comes into the movie and everyone thinks he is just a typical boss who is protective of his business, but he changes throughout the film in character and becomes more psychotic. What truly is brilliant is that he is scary, but it is so subtle in the way he is aggresive at times and then so obviously brutal at others. Hal Holbrook is also commendable as the older Jacob. He is completely believable and very sweet.

However, the only problem is that the romantic chemistry between Pattinson and Witherspoon is nearly non-existent. You can't really see the love between the two characters at all and there is no heat or passion in the love scenes. They both seem to do well in their roles individually, but there is no chemistry at all to be felt. The older Jacob shows more emotion towards Marlena than the young Jacob. As a result, the film is more moving in regards to the animals and not with the romanticism.

"Water For Elephants" is one of the most entertaining, enjoyable and beautiful films released so far in 2011. It is a beautiful story with beautiful images with beautiful characters. It is not often a book adaptation is amazing, but this one truly is.
8/10