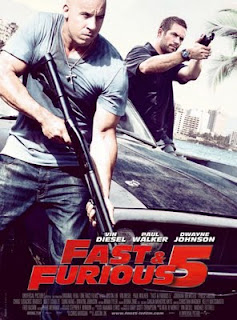 In My Own Words
This was one of those films I didn't think I would enjoy. I've never been one who is really into cars  and honestly, a lot of the names of cars they spoke about in this movie they might as well have been speaking another language because I had no idea what they were talking about. I know I wouldn't be the only one who felt like this out here. Yet, "The Fast & The Furious" series is funny like that. It's not only people who love cars who see these films. It's got cars and action for the male audience and the "eye candy" for the female audience. How clever are the film makers? They have all bases covered! So if we talked about an action film about cars, and one did not know we were talking about "The Fast & The Furious", we would normally think that this would be primarily a boys film. Yet, they add a pretty male face such as that of Paul Walker and the muscle of Vin Diesel, and voila! We have a film that girls are going to flock to as well! Of course, these decisions were made 10 years ago when the first "Fast & Furious" came out, but actually watching the 5th installment as a critic made me realise that love or hate the films, first movie director Rob Cohen definitely know he was onto something!

And no, I never hated the films. They just happenned to be one of those things that reminded me of a bad stage in my life. Just like songs that you relate to a good or bad stage in your life, movies will do the same for me. For example, the first and second "Fast & Furious" were released at a bad stage in my life and were a favourite of some people who weren't too nice to me at that stage. Therefore, the films left a sour taste in my mouth. Thankfully that stage and those people are long gone now and this film has cured my allergy to them! On the other hand, films can also give you good memories. Take for example, "Disturbia". Not one of my all time favourites, but it always make me happy because I saw it for the first time when I was in Los Angeles for the first time. Also because I was lucky enough to be in Hollywood the night of it's premiere! I'm not saying I critique films purely on my personal and emotional experiences with it's release, as that could not be further from the truth! Yet, the thought of different films will always provoke different feelings for me based on what was going on in my life at the time.

Review
One would believe that once the 5th installment of a series of films comes along, the franchise should be losing it's intensity. "Fast Five" does everything but prove this theory correct. "Fast Five" is one of those action films that stays true to it's genre, there is no lack of action or special effects. Unlike many other action films, this one doesn't lack in the story. Sure it has it's moments where the script is quite corny and the acting dull, but it is able to carry the storyline through in a straight line from beginning to end with the action being welded into it.

Brian O'Conner (Paul Walker) and Dominic Toretto (Vin Diesel) meet up again in Rio de Janeiro to try and win a life of freedom. They assemble a group of players in order to cut one of the countries richest businessmen of his fortune and take it for themselves. Of course, this is no easy task. They have to do so with Luke Hobbs (Dwayne Johnson) and his hand picked agent, Elena (Elsa Pataky) watching their every move.

It is always a delight going into a film which you suspect will have no substance only to discover that the film in question is more than just impressive explosions and slick-looking cars. "Fast Five" is able to carry the story through from beginning to end and is one of those rare films where if you took all the action away, you will still have a fairly decent movie. Although it wouldn't be anything like what it is now and wouldn't be any near as interesting. However, the film does tend to have some moments where it feels like not much is happenning at all, which does detract from the overall suspense.

The cinematography and special effects are great, as are the sound effects which accompany these visions. Even if you know nothing about cars, they are very impressive and can do some amazing things. Although, there isn't as much of the film focused on the cars as such. The cars are just there as tools for the big mission. This is a good thing really, so those who are not big car fans can enjoy the movie rather than be bombarded with automobile references.The location shots of Rio de Janeiro are extremely impressive. The camera is able to grasp many different aspects of the city. It shows the beauty of the landscape, the brutality and danger of the residence and also the fast paced city life.

The lowest part of the film is the acting, but "The Fast & The Furious" movies were never supposed to put forward contenders for the Academy Awards so it can be forgiven. There really isn't any stand out performances in this film. Perhaps the best performance is from Jordana Brewster who plays O'Conner's partner and Torretto's sister, Mia. One scene in particular she is quite impressive in when she is trying to protect her brother. However, one has to wonder how a pregnant woman can jump through roof's and run through the streets of Rio. Dwayne Johnson's performance is very lame and his part very stereotypical of his acting range. Paul Walker and Vin Diesel may be the stars of the show, but their acting just mediocre.

"Fast Five" is an entertaining 130 minute action spectacular. Although very unrealistic just in the way a good action flick should be, it is suspenseful with extremely impressive visuals and special effects. One for the girls and boys.
7/10