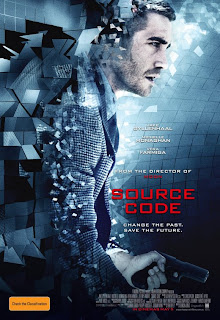 Source Code
Year: 2011
Director: Duncan Jones
Cast: Jake Gyllenhaal, Michelle Monaghan, Vera Farmiga
In My Own Words
Jake Gyllenhaal is in the position that many, many actors would love to be in. How many actors are typecast in a particular role and can’t seem to break that ice? Gyllenhaal doesn’t have that problem at this stage in his career. It must be a great feeling to know that you can do any genre and any role you feel like, while others feel like they cannot venture outside the roles they are known for as it is too much of a risk, and for fear that nobody will want to see them in these roles. Let’s look at his last few roles. There is of course his role in “Source Code”, which is an action thriller and his role before which was in the romantic comedy, “Love And Other Drugs”. The lead role in Disney’s action adventure fantasy, “Prince Of Persia: The Sands Of Time” and the brother of a troubled American soldier in the drama, “Brothers”. He has been acclaimed for each one of these roles. He has done many other different roles over his 20 year career. He is a lucky man to have so much freedom with his choice of roles, he will never get bored of what he does as long as he is able to do so many different roles. Well, at least we hope not!
These are my own words and here is my review.
Review
“Source Code” is the breath of fresh air that the action thriller genre has been waiting for. 2011 has not bought anything new and surprising to the table for the action thriller genre until now. “Source Code” resembles a cross between an Alfred Hitchcock film and “Groundhog Day”, a combination which, thanks to the creative choices of Duncan Jones, works and works well. There is suspense from the word go and surprises along the way with impressive special effects, the exact elements which make up a successful action thriller.
Colter Stevens (Jake Gyllenhaal) wakes up on a commuter train heading towards the city of Chicago in a body which isn’t his own and without any recollection of how he got there. He is accompanied by Christina (Michelle Monoghan), who believes he is teacher, Sean Fentress. While Stevens is trying to figure out who he is, the train which he is on unexpectedly blows up, and he then finds that he is part of a project in which he is inserted into Sean Fentress’ body in 8 minute intervals to find out who planted the bomb on the Chicago train. Although the main object of the source code is to find the bomber, Stevens has different objectives in his mind.
If Hitchcock was alive and making films today, there is no doubt that “Source Code” would be a film he would make. The creepy music in the opening scene with a montage of trains is something which would have just been typical of a Hitchcock film, as well as the psychedelic images that link reality and the source code. While the images are reminiscent of Hitchcock and his film making, the story is completely original. Yes, it does have the déjà vu aspect of “Groundhog Day”, but it has a completely different story and is definitely well written. The “who done it” may not be too surprising to some, but there are other psychological twists and turns which keep the audience on the edge of their seats and guessing. The musical score and images all add to the overall intensity and suspense of the film.
Jake Gyllenhaal once again proves that he can do any role he wishes with putting in a great performance as the once helicopter pilot who is confused and frustrated with his situation. As well as there being the moments of intensity in his performance, there is also surprising emotional moments which show his acting versatility. The film revolves around him and he once again shows how he can hold his own as the lead star with perfect characterization and character-audience relationship. Michelle Monaghan is sweet as Christina, but there is no real substance to her role. There is really no risk involved in this role or any character development. Vera Farmiga is more impressive than Monaghan, but it is still not a ground breaking role. The decisions which should be emotional ones do not seem so. It is Gyllenhaal who is the main star and the one who, rightly so, makes the biggest impact in the film.
“Source Code” is a very entertaining and intriguing film. It keeps the audience’s full attention from the beginning to the end and is something new and not in the trend of Hollywood action thrillers.
8/10
Posted by NP1982 at 3:36 AM