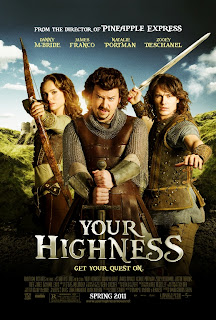 In My Own Words
Well, this movie may not be everyone's cup of tea. If you like crude humour,you will love it. If you don't like crude humour and don't like overuse of the "f-bomb", then you may want to avoid this movie like the plague. I am not usually one for crude humour and with some of the jokes of this nature in the film I could do little more than roll my eyes, but for some strange reason I found Danny McBride's overuse of the "f-bomb" and words of other such nature quite hilarious. I may need to check my temperature. I think it was the way which he swore most of the time was so non-chalant and random that it was just my type of humour. I understand that not everyone shares my sense of humour where I find the random hilarious, so that part of my thoughts about the movie appears in "In My Own Words"!

I've said it before and I will say it again, I have the utmost respect for James Franco. I love that he does movies like these as well as the dramatic film. Why? Because it is just fun! What better way to break up your films than to do a few dramatic films and then break it up with something like this? Plus I love the fact that he studies while being an actor, and he has done as many degrees as he has done. It's great to know that he truly appreciates film as an art form, rather than just what he does for a job. I salute you James Franco.

These are my own words and here is  my review.

Review
"Your Highness" is the most over the top comedy you will see this year. It is completely ridiculous, over-acted and there is no way you can take it seriously. However, the best thing is it knows it is all of these things. "Your Highness" does not try to be anything that it isn't, which is commendable. It laughs at itself and laughs at the genre it is in. It knows it is ridiculous so it plays up to it and makes it no matter how stupid it may seem, it is bearable and even quite funny.

Long ago in a medieval kingdom, there lived a king and his two sons, Fabious (James Franco) and Thadeous (Danny McBride). Thadeous is continually in the shadow of his older brother and the kingdom considers him to be a joke. When Fabious' bride to be, Belladonna (Zooey Deschanel) is kidnapped by an evil wizard, Leezar (Justin Theroux), the two brothers set off on a quest to save her. This could be Thadeous' chance to prove his worth to himself, his family and the whole kingdom!

"Your Highness" will definitely not suit everyone's sense of humour. There is a lot of sexual inuendo, crude language and images and dirty jokes which a lot of people will find downright disgusting. Yet, if you don't mind that sort of things and you can handle the sight of and find funny a minotaur humping one of the king's servants, you will have a good giggle at this film. "Your Highness" was largely improvised and no proper script was used for the majority of filming. When you think about this, it actually gives you more respect for the film and it's actors as they have come up with some very funny lines themselves.

The best thing about "Your Highness" is that it doesn't try to be anything that it is not. It knows what it is and accomplishes everything that it should. It is not a classic, it won't be remembered for years to come, but it does it's job for the here and now. It pokes fun at the fantasy genre and the over-the-topness of some of the key elements of fantasy films, such as the wedding song by Fabious and Belladonna and he valiant prince going to rescue his true love.

There are really no good dramatic performances in the film nor any performances which show what the actor is capable of. All you see is a group of actors having some fun with something different and trying as hard as they can to make their performances as over the top as possible. Danny McBride is the unlikely lead and is repulsive and disgusting as he aims to be. Yet, he is also very funny. James Franco's performance is so exaggerated that it is perfectly suited to the role which he is playing. His character is probably the most wholesome of all the male characters. Zooey Deschanel is good, but her performance isn't anything we'll remember when speaking of her best films. Natalie Portman holds her own well, but she is not particularly funny. While Portman may be at the top of her game in her dramatic roles, comedy is still not really her forte.

"Your Highness" is not for everyone. This point cannot be exaggerated enough. Yet, it is actually refreshing to see such a crude comedy in a different light rather than it being about modern day men on quest for their manhood. If you are open, "Your Highness" is a bit of fun and good for a giggle.
5/10