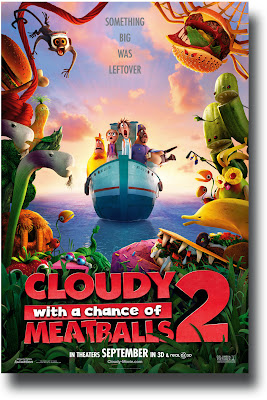 Cloudy With A Chance Of Meatballs 2 opens in Australia on the 5th December 2013 and is distributed by Sony Pictures. Now showing in the USA and United Kingdom.

Cloudy With A Chance of Meatballs 2 is thankfully the type of sequel that doesn't rely on the first film to make it's way in the world. It is original in it's own way, very cute and fun, the perfect film for families to enjoy together. It isn't particularly the most memorable film, but still allows for a particularly enjoyable hour and a half of your day. 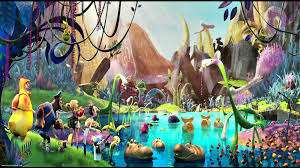 We meet Cloudy With A Chance of Meatballs hero, Flint Lockwood (Bill Hader) again literally moments after the last film, just as he reveals to his now girlfriend, Sam Sparks (Anna Faris) that he would like to really commit to her. We are also taken through a speedy reminder of Flint's adventures up until this point in the first few minutes of the film, before Flint's life long idol, Chester V (Will Forte) appears to offer Flint the opportunity of a lifetime to work for him and become an inventor for his company. As amazing an opportunity that it is, things do not go Flint's way and he is soon summoned back to his hometown of Swallow Falls, which has now been taken over by food-animal hybrids.

The fact that Cloudy With A Chance of Meatballs 2 is a sequel shouldn't let anyone stop seeing it. Although it is a sequel, there is no possible way in which you are felt out of the loop. The first few minutes takes you quickly through what happened in the first film so not to discriminate against those who didn't see the first film. However, even without this introduction, there isn't too much in the film which relies on the first film, meaning you don't necessarily have to watch the first film in order to understand exactly what is happening. As is the case with most follow up films, it does still pay to watch the first film just to get a further grasp of the characters, but those who haven't seen the first film will not leave the film feeling as though they don't know that much about the main players.

Cloudy With A Chance of Meatballs is a visual treat, in more ways than one. The use of colour throughout the film is exquisite and they are used to create the optimum effect, particularly in the scenes in Swallow Falls and with Flint's hilarious celebration invention. The creativity when it comes to the food-animal hybrids is wonderful. Audiences will find that the scenes in Swallow Falls are a collage of alive food, such as "tacodiles", "shrimpanzees" and some pretty terrifying hamburgers, as well as submarines which are actually Subway sub's. There are also some very cute and social live strawberries. 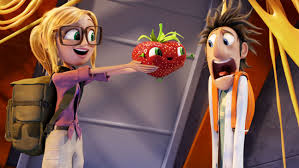 The story is quite clever, but it is a story that will be enjoyed more by children than adults. Even though this is a film for the whole family, adults will find the visuals more satisfying than the screenplay itself. Cloudy With A Chance of Meatballs 2 can absolutely be described as cute above all else. It is a fun film, but has no real emotional depth or suspense as it is targeted towards family as a whole being able to enjoy it. As a result it is not particularly memorable, but still serves it's purpose of being an enjoyable and fun film.

Bill Hader once again does well as Flint and gives a great deal of character through his voice. Will Forte does an interesting job as Chester V, and Andy Samberg and James Caan are great fun as Brent McHale and Tim Lockwood. Neil Patrick Harris also makes hilarious monkey Steve even funnier with his vocals.

Cloudy With A Chance of Meatballs 2 is a fun film that parents will be able to enjoy with their children. The living, breathing food are a great highlight, and will leave you craving a taco or two. You may also wish that Caffeine Stations were a feature at your workplace too.