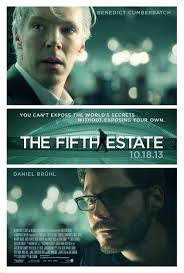 Year: 2013
Running Time: 128 minutes
Director: Bill Condon
Writers: Daniel Domscheit-Berg (book), David Leigh and Luke Harding (book), Josh Singer (adaptation)
Cast: Benedict Cumberbatch, Daniel Bruhl, David Thewlis, Laura Linney, Stanley Tucci, Alicia Vikander
The Fifth Estate is now showing in Australia, the USA and the UK.
﻿
Julian Assange is without a doubt one of the most intriguing figures of the twenty-first century. He may not be everyone's favourite person, but everyone wants to know what he has done, what he is doing and what he is saying. Assange is perceived as being a one of a kind dangerous man, as he has no weapons to fight with besides the truth and the ways he can obtain it.

So it definitely comes as a surprise that The Fifth Estate doesn't provide a solid platform for this enigmatic figure. One may toy with the idea that it may still be a bit too soon to have a feature film about the Wikileaks founder, but it is more to do with the fact that the film has no sense of suspense or tension and is void of any emotion. It is such a shame that an interesting case such as Wikileaks should be presented in such a tedious manner and is unable to grasp the emotion and seriousness of the situation. Yet, the representation of Julian Assange by Benedict Cumberbatch doesn't disappoint.

The Fifth Estate chronicles the rise of Wikileaks from it's very beginnings as seen largely through the eyes of Daniel Berg (Daniel Bruhl). Berg worked closely with the infamous and enigmatic Julian Assange (Benedict Cumberbatch) during the quest to uncover the truth that some of the world's largest organisations are withholding from the public. This was the quest that led Assange to having access to the collection of the most incriminating documents in American history. Whilst The Fifth Estate covers in great detail the events that led up to this controversy, it also looks at the relationship between Berg and Assange and gives insight into the real Julian Assange. 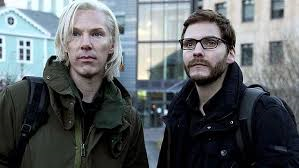 The biggest problem with The Fifth Estate is that it is completely void of tension and emotion. In a film such as this in which a recent and culturally significant event is being represented, it is vital that it have the ability to create an emotional impact. There is no emotion felt throughout the whole film, not even when dealing with the revelations of Bradley Manning, which is such an emotional topic anyway. The film coasts along without any urgency and adds at least another ten minutes on at the end which doesn't need to be there. This ten minutes is obviously there for the reason that director, Bull Condon is trying to help the film finish on a spectacular and meaningful note, but it does quite the opposite. The drawn out ending has viewers leaving the film remembering that they just felt bored and this is the memory they take with them about The Fifth Estate.

However, the cinematography is actually really wonderful and equally intriguing. The virtual workspace of Wikileaks is represented brilliantly and is genius, as it represents the deception virtual workplaces can hold. The beginning montage is also very good and the subtitles giving the sense of coming straight of a computer is a nice touch. The soundtrack is most fitting as well.

The actual character of Julian Assange in the film leads us to think that maybe The Fifth Estate has been made a little too early. Anybody who has followed Assange's movements over the past few years and seen footage of him or has seen this year's documentary, We Steal Secrets: The Story Of Wikileaks will recognise many of the scenes are actual recreations of Assange. There are several scenes which mirror Assange's conferences and also one which is a recreation of footage of Assange dancing in his unique style. However, Assange being the person he is is not a personality which transfers well to screen. From what we have seen and heard of him, he is a very complex human being and has a very distinctive air about him. To those who are not familiar with the man (although it is unlikely there are too many who aren't), some of the dialogue used by Benedict Cumberbatch's Assange may seem a little too unusual and his dancing scene especially will seem ridiculous. At this point in time, it is probably a little too soon to be seeing a take on Assange on the screen. His character isn't likable at all on screen, but many may argue that he is not likable in real life as well if Daniel Berg's experiences are anything to go by. One thing is for sure, he is still an interesting and complex character, but he may not be the character current movie goers are interested in seeing. In a few years time when Assange is categorized as an historical figure, he may be even more interesting on screen when audiences are interested in knowing what he was really like. At this point in time, it doesn't feel as though we are finding out anything about Julian Assange that we don't already know, especially if you had already seen We Steal Secrets this year.

Yet this is no fault of Benedict Cumberbatch's. It is evident that Cumberbatch has studied Assange's behaviour, dialogue and body language in great depth for the film and it has paid off, as he does very well and is better than the film he is in. The Englishman's Australian accent is very convincing, just like his portrayal of Assange. Daniel Bruhl is good, but it doesn't feel as though the screenplay gives him enough opportunity to really show emotion or take his performance further. The same can be said for Alicia Vikander who plays Berg's girlfriend, Anke Domscheit. She really does not have enough to work with and all we see are sparks of potential. 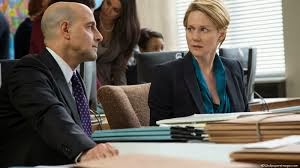 It is a shame that we don't see enough of Laura Linney in The Fifth Estate because she is wonderful in this film as Sarah Shaw. She is such a strong female character and shines in her role. Stanley Tucci is in the same boat as James Boswell, as he really does not have enough screen time.

With more emotion and suspense, The Fifth Estate would have worked better in a few years time when people feel the need to find out more about what really happened with Wikileaks. Just a little too soon and a little too weak.

You may have also seen Benedict Cumberbatch in......
Star Trek Into Darkness as Khan