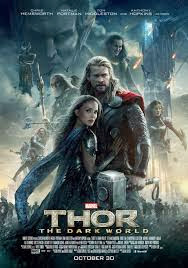 There was never any doubt that Thor: The Dark World was going to reminiscent of it's predecessor, which was just a little bit corny, but still a lot of fun.

And it has proved itself to be just that. However, it has avoided the pitfall that many sequels tend to fall into, which is the "The sequel is never as good as the first" category. That isn't to say that Thor: The Dark World is better than the first film, but it is also not noticeably worse than it. Sequel business aside, it is also surprisingly comical and, not so surprisingly, action packed.

Years ago, the Dark Elves entered into battle to return the universe to the dark it was once in, but using an element called Aether. Since then the Dark Elves have been banished and are only awakened when Jane Foster (Natalie Portman) finds the Aether and has it enter her body. Jane hasn't seen Thor (Chris Hemsworth) since he left her in the first film, but he returns to her as soon as he believes she is in danger. He takes her to Asgard to keep her safe and in his sights while the Dark Elves are after her. However, there is one ally Thor needs more than anybody else in these times, and that is his brother, Loki (Tom Hiddleston), who, of course, is locked in the dungeon after trying to destroy the world. 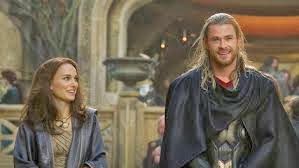 Thor: The Dark World is by all means what you would expect from it. It is more about the action, spectacle and entertainment than about the dramatic, realistic and sentimental. The action sequences sure are impressive, especially the final showdown set in Greenwich. The CGI used to create Asgard and it's surroundings is very well done, although Asgard seems to have suddenly become a cross between a cross between Rivendell from The Lord of The Rings and Naboo from Star Wars. There is also a scene between Natalie Portman and Chris Hemsworth which is almost visually identical to one in Attack of the Clones between her and Hayden Christensen.

As was the case with the original Thor, the script is as corny as can be. Thor himself seems to be a corny character in general, which can often come with the territory of being a buff and handsome god. He is not particularly a character who has cinematically been represented in a serious light, so the amount of humour in the script seems appropriate. While the first half of Thor: The Dark World tends to be somewhat mediocre as not much really happens, the second hour is much better as there is more humour, action and more of Tom Hiddleston's Loki. There is so much humour that the film somewhat borders on a comedy. However, the comedy in the film does work and proves rather enjoyable and entertaining.

Even though Hemsworth's Thor is the star of the film, the film has it's best moments when Tom Hiddleston is on screen. Loki is an extremely complex character. He obviously has an evil past, but this doesn't change the fact that you never quite know what his motives are. Hiddleston makes Loki into a character which the audience feels a real connection with and he is truly the highlight of the film. 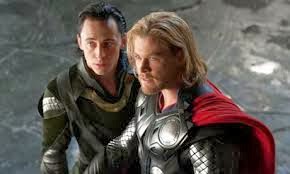 Hemsworth does well enough, but his character, as opposed to Loki's is very one-dimensional and nto quite as interesting. Natalie Portman does well as Jane Foster, but often falls into the corniness that Thor does, as one would guess considering she is his love interest. Kat Dennings is also very funny as Darcy and like Hiddleston, doesn't have a bad scene in the whole film. Chris O'Dowd is also on screen for a very short amount of time, but is memorable for his well delivered comedic dialogue.

Thor: The Dark World achieves exactly what it sets out to do as it is entertaining and enjoyable for the most part. Perhaps not the best and most original action production in recent times, but still has some moments worth seeing the film for.

You may have also seen Chris Hemsworth in.....
Thor and The Avengers as Thor
Rush as James Hunt

You may have also seen Tom Hiddleston in....
Thor and The Avengers as Loki
Midnight In Paris as F. Scott Fitzgerald

You may have also seen Natalie Portman in.....
Thor as Jane Foster
Black Swan as Nina Sayers
Posted by NP1982 at 11:56 PM