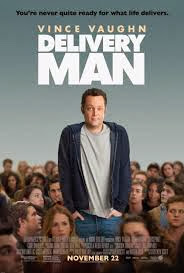 Delivery Man will be released in Australia on the 5th December and is now showing in the USA.

On the surface, Delivery Man may seem ludicrous and it is true that you do have to abandon reason for awhile, but underneath it has a great deal of heart and warmth.

Delivery Man does have the tendency to cross over into the territory of the ridiculous and the all too familiar comical cliché territory. These are the territories that you would never have any doubt that a film about a anonymous sperm donor fathering 533 children would fall into. However, Vince Vaughn does do a wonderful job of showing how parental instinct can click straight in when you become a parent yourself, and this is what gives the film a really beautiful silver lining.

David (Vince Vaughn) is an underachiever who just can't seem to get anything right no matter how hard he tries. He finds himself at an all time low when he has to grow marijuana in his apartment in order to raise money to pay off some massive financial trouble he finds himself in. However, his world is turned around and he makes a decision to turn his life around after two major life events take place. Firstly, his newly ex-girlfriend, Emma (Cobie Smulders) tells David that she is pregnant and he is the father of the baby. He also finds out that when he was an anonymous sperm donor 20 years earlier, this resulted in him being the father of 533 children and 142 of them are filing a lawsuit in order for him to reveal his identity. 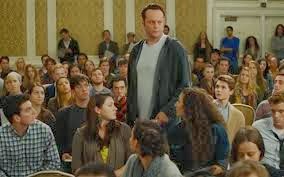 So much about Delivery Man is cliché. We have all seen before the underdog who makes good as a result of a life changing event in countless comedies before this one. The music, editing and cinematography are all the same as the same sort of films which have came before it. Based on the 2011 Canadian film, Starbuck, Ken Scott has remade his own indie film with the Hollywood benefits. Indeed the fact this film was made does seem like a Hollywood thing to do when it comes to comedies. When one hears a story about a man anonymously fathering 533 children, it does sound comical in itself. It almost sounds as though it was screaming for a main stream film and if Scott didn't remake it himself, someone else would have as it fits the mould of an atypical Hollywood comedy film. What strikes you about Delivery Man more than anything else is that it's face value is absolutely nothing we haven't seen before and there is nothing really new it brings to the table.

However, scratch the surface and you see something you may not see everyday in such a comedy film. There is something really beautiful about Delivery Man. It will actually reach out and pull the heart strings of many people who will see it, particularly parents. Every parent knows that the period before you become one is a terrifying time filled with worry and self doubt as to what kind of mother or father you will be. Yet the moment you see your child for the first time, your parental instinct kicks in and all you want to do is love and protect your child. Delivery Man shows us that this parental instinct can kick in when you first lay your eyes on your offspring, whether it be the moment they are born or later in life like in this case. It is extremely touching watching this happen. Of course there are the things you do wonder about, like what the future holds for this man with so many children and where are the mothers in all this, but it is still very sweet watching parental love in it's simplest form.

Vince Vaughn may have seemed the obvious choice for a comedy film like many we have seen before as he has proved that he can play the lovable underdog well, but he goes above and beyond expectations, especially in the final scenes. Funnily enough, it is actually the "loser" part of his role that he is least believable. He doesn't really strike you as as much of a no-hoper that the film would have you believe he is. Sure the story suggests otherwise, but not the way he carries himself. He is far more believable as the proud father of how many children. As Vaughn became a father for the second time this year in real life, he must have brought a lot of the energy he has for his biological children to this role. You can feel the love his character has for the young people he comes into contact with and it is this that makes the film so sweet. 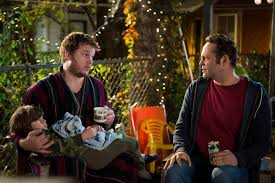 Although Vaughn has the main role in the film and is the star, Chris Pratt provides the comedy relief. His relationship with his children is really hilarious, particularly in the sandpit scene. While Vaughn is normally the head comedian in his films, it is Pratt who is in this film and he adopts this title with ease. Cobie Smulders is also very good as David's girlfriend, Emma. Britt Robertson, who plays Kristen, and Jack Reynor as Josh are also stand outs.

Delivery Man must be seen in order to appreciate the emotional depth it possesses. Although it may seem no different in many ways to comedy films we have seen before, it has more heart than we could have imagines.