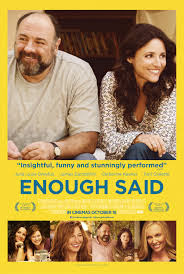 Year: 2013
Running Time: 93 minutes
Director: Nicole Holofcener
Writer: Nicole Holofcener
Cast: Julia Louis-Dreyfus, James Gandolfini, Catherine Keener, Toni Collette, Ben Falcone
Enough Said will be released in Australia on the 14th November 2013 and will be distributed by 20th Century Fox. Now showing in the USA and the UK.
Enough Said is one of the most refreshingly real romantic comedies of recent times.
While not all of us will go through the same situation these characters go through, the film deals with some very real feelings dealt with when approaching a new relationship, while still hurting from the last one. Enough Said is a grown up comedy, which is still incredibly moving and can also be quite saddening at times. Not to mention it is an emotional experience in itself seeing the last of James Gandolfini on screen and especially in such a beautiful performance which reminds us what we have lost.
Eva (Julia Louis-Dreyfus) is a masseuse and single mother who's daughter, much to her dismay, is about to leave her to go to college. She has not had another serious relationship since her ex-husband, until she meets Albert (James Gandolfini) at a party and the two start dating. At the same point in time, she forms a friendship with a new client of hers, Marianne (Catherine Keener), who she very much looks up to. Eva soon finds out that Albert is Marianne's ex-husband, the man who Marianne has been telling Eva all these horrible things about, making life extremely awkward for her. Eva struggles to distinguish the difference between what she thinks about her new boyfriend and what Marianne thinks about her ex husband as a result.
Enough Said is a really beautiful film about human behaviour and relationships. Director and writer, Nicole Holofcener has done a wonderful job of constructing a screenplay with so much feeling and which brings out so much character in all the players. The only criticism that can be made about the screenplay is that it has a period in the middle of the film where it feels as though the film has started to chase it's on tail. The same conversation seems to keep taking place while Eva is trying to figure out what to do in her predicament and it takes awhile for the film to keep flowing, but when it does, it is well worth it.
Enough Said can be incredibly realistic at times and many people will see themselves in characters such as Eva and Albert. The films representation of divorced or separated parents can be quite haunting in it's realism. One of the most striking moments of the film occurs when Eva is trying to explain to Albert why she didn't tell him how she knew his ex-wife. She explains that she was trying to protect herself against getting hurt in the same way she did in her marriage, to which Albert replies "But you forgot to protect us". 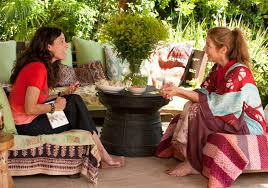 This line and indeed much of the film will hit very close to home for those people who have been married (or have just been in a long term committed relationship) before and are trying to move on with a new relationship. As Eva does in the film, as much as you try not to compare your new relationship to the last one, you are continuously on the look out for signs why it could not work instead of  reasons why it should. It is frustrating to the viewer to see how Eva starts focusing on the negatives in her relationship with Albert, rather than seeing the positives, which are incredibly evident to someone looking from the outside in. Yet, people like Eva will be able to understand how it is incredibly hard to just take the good with the bad and move ahead. Once you have found yourself able to allow the good to wash over the bad, you can move on, but if you continue to see a new relationship as an extension of the failed one, it will inevitably reach the same demise as the first.﻿

Another factor of the film which many people will find familiar is that of the children moving away from home for the first time. Both Eva and Albert are very close to their daughters and Eva especially has a very hard time saying goodbye to her daughter as she feels like she has no one else. As the film progresses, it is almost a grieving process for her and she tries to find ways to cope with the feeling of neglect that she is experiencing. Again, from the outside we know that Eva's daughter, Ellen is not neglecting her, but only undertaking a rite of passage of leaving home to go to college so common to American young adults. Yet, in Eva's situation, the separation is made even harder and she feels the need to again protect herself from the inevitable pain of losing her daughter to college. In today's society it is not an unfamiliar story where single parents try to find new love and are faced with feeling incredibly alone when their children leave home, and these themes in Enough Said will be quite saddening to some people, but will also cause relief in others who will finally realise that the way they feel is not all that uncommon. 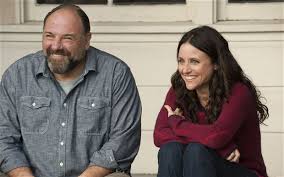 Julia Louis-Dreyfus is wonderful as the leading lady in Enough Said. She completely embodies her character and is incredibly likable despite her bad decisions. Her Eva is a character who many people will be able to relate to. Louis-Dreyfus' comedic background helps her very much in the film and it is the little things with her dash of humour which make her performance so gorgeous.

James Gandolfini's whole performance is just so heart-breaking. Even without the knowledge that this was his last role before his untimely death, it is still terrible to see such a beautiful character as his being treated so badly on screen. Although Catherine Keener does give a good performance as his ex-wife, Marianne is an incredibly selfish and snobbish character. Albert on the other hand has flaws, but is so gentle and lovable. It crushes you as you watch events crush him throughout the film. Even though Louis-Dreyfus' is the star of the film, Gandolfini is the hero. His simple and subtle, yet emotional and charismatic performance is one which will be remembered.

Enough Said is a film that looks simple enough on the surface, but has a great deal of depth. This is achieved by a wonderful screenplay brought to life by perfect performances.