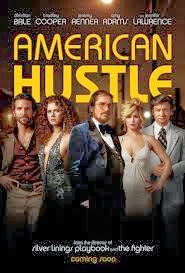 American Hustle is now showing in Australian cinemas and is distributed by Roadshow Films. Opening in the USA and UK on the 20th January 2013.

Could a film like American Hustle possibly avoid the hype? Not likely. Director David O. Russell’s film making has gone from strength to strength, especially with his last two films, The Fighter and Silver Linings Playbook. Then there is the impressive cast which Russell is able to assemble for his latest film, all of which are past Academy Award nominees (Christian Bale and Jennifer Lawrence having won one award each and both under Russell’s direction) and all, except Jeremy Renner, who have worked with him before. So we have one of the most talented film makers in the business today and five of the biggest movie stars in the world working together on one film. American Hustle is a hit even before the first tickets are sold.

It’s a good thing that American Hustle does live up to its hype. Russell once again brings out the very best in his actors with some incredible and captivating performances taking place, especially that of Jennifer Lawrence. The performances do tend to hide the fact that even though the screenplay contains the usual brilliant dialogue Russell’s movies possess, it does try to do a little too much and ends up achieving the opposite of what it is meaning to in parts. It gives too much at times, and too little in others. Yet, the players in American Hustle still manage to overshadow these inconsistencies and make the film the hit it was always believed it would be.

Irving Rosenfeld (Christian Bale) is a charismatic career con man who is in business with the seductive and deceptive Sydney Prosser (Amy Adams), who cons everyone besides Irving into believing that she is the British Lady Edith with numerous valuable connections. At the height of their business, they are caught out by FBI agent, Richie DiMaso (Bradley Cooper). Agent DiMaso convinces the two to work with him in order to con those the FBI has had their eyes on. Together the three of them head into the world of New Jersey powerbrokers and mafia with their sights set on Mayor Carmine Polito (Jeremy Renner) who is looking to rework Atlantic City. The only thing that stands in their way is Irving’s unpredictable and unstable wife, Roslyn (Jennifer Lawrence) who has the power to overthrow everything if she says the wrong thing to the wrong people. 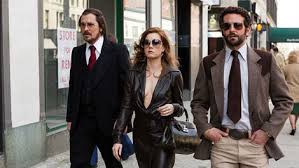 Firstly, the thing that has American Hustle missing the link between a very good film and a brilliant film is it’s screenplay by Russell and Eric Singer. The film isn’t consistently enthralling and at times tends to lull. At 138 minutes running time the film isn’t overly long, but it does try to pack too much into that time. This leads to the film spending a little time on everything and therefore not spending enough time on things which are important to the story, and too much time on little things which don’t have to be in the film. Yet the screenplay is not by a long stretch a failing one due to the brilliant and colourful dialogue given to its characters, which has become a trademark of Russell’s films and is always a favourite amongst audiences.

The late 1970’s is brought back in spectacular style. The fashion and hair is spot on for the time and add to the overall atmosphere of the film. The décor of locations such as Irving’s office and house is extremely reminiscent and spot on of life in the 1970’s, particularly of his house where domestic and psychedelic collide. The time period inspired soundtrack is also great fun. There are some wonderful cinematography moments, in particular during the opening credits with the three lead characters, Irving, Sydney and Richie walking up a corridor in unison, which straight away tells you how important these three will be. There are some strange and unexplained cinematography moments, like the close up of Sydney’s stiletto in the car. Yet this seems to be a recurring visual from Russell’s films as the is a similar vision in The Fighter of Melissa Leo’s high heels.

Russell has once again brought out the best in his lead actors. All of the top five billing actors give performances that will always be remembered as one of their best. Christian Bale is brilliant as Irving. One would normally think of a somewhat sleazy looking and overweight con man and think about how unlikable such a figure would be, but Bale makes him absolutely intriguing and astonishingly makes him likable. He is just so charismatic and full of character and towards the end of the film, you are really rooting for him. Amy Adams has once again morphed herself into another intriguing character. You never really find out exactly who she really is underneath her disguise, but through Adams’ acting we can see the hurt and insecure girl she really is underneath all her sexy glamour. 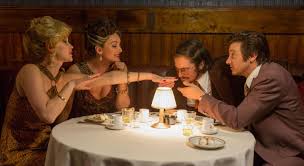 Bradley Cooper gives another stellar performance under Russell’s guidance. In the opening scenes, the first verbal confrontation between Bale and Cooper is just superb as watching these two amazing actors go at each other is a real treat. Cooper’s scenes where he loses control and goes slightly mad are so interesting to watch. Jeremy Renner is also superb. He is so likable as Carmine and as you watch him being deceived, you feel so embarrassed and bad for him. The only complaint about the films players is that there is not enough of the uncredited Robert De Niro.

It is Jennifer Lawrence who you remember the most when you leave American Hustle. . She is an absolute scene stealer whenever she is on screen and as she doesn’t have as much on screen time as her cast members, you really wish you could see more of her. Her dialogue is great and everything she does is so entertaining. Lawrence has the uncanny ability of being able to play someone who is supposed to be older and more life experienced than she is, and she is never questioned by anyone as she is so believable and brilliant.

American Hustle is a cinematic delight. The story may not be continuously riveting in its execution, but it has many redeemable qualities. A must see for fans of David O. Russell or any of the five main players. And what you have probably heard is also true, there is an astonishing amount off sideboob.


You may have also seen Christian Bale in....
The Fighter as Dickie
The Dark Knight Rises as Bruce Wayne/ Batman

You may have also seen Amy Adams in....
The Fighter as Charlene
Man of Steel as Lois Lane

You may have also seen Bradley Cooper in....
Silver Linings Playbook as Pat Solitano

You may have also seen Jennifer Lawrence in.....
Silver Linings Playbook as Tiffany Maxwell
The Hunger Games: Catching Fire as Katniss Everdeen