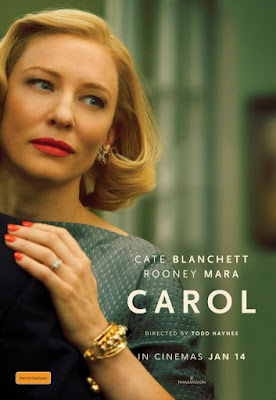 This early piece of dialogue said by the film loving character of Dannie (as portrayed by John Magaro) is a wonderful interpretation of Todd Haynes' Carol which is written into it's screenplay by Phyllis Nagy. It is not so much in what the characters say as what they show that is the heart of the this deep, beautiful and visually stunning film. The portrayals of these extraordinary and memorable characters by Cate Blanchett and Rooney Mara ensure that Carol is not just a film about forbidden love, but a story of self discovery and acceptance through our relationships with others and chance encounters.

1950's New York City: Therese Belivet (Rooney Mara) lives a life that may seem fine from the outside, but she is left unfulfilled by her job at a department store when she aspires to be a photographer and also within her relationship with her boyfriend, Richard (Jake Lacy) who very much wants to make Therese his wife. A chance encounter with the older and more sophisticated Carol Aird (Cate Blanchett) takes Therese's life in a different direction as she and Carol begin a close friendship which turns into something far deeper and emotional. The two travel on an idyllic road trip together, which comes to an abrupt halt when Carol receives word that her husband (Kyle Chandler) plans to use information about her and Therese against her in a court action that will result in her being denied a relationship with her beloved daughter.

Carol is not just a story of a love affair between two women, it is a story about a twist of fate or simple event that see's your life take on new meaning and direction. In this film, it is the simple glance between Carol and Therese before they meet that symbolises the changing of Therese's life and the start of her leaving behind her unsettled and awkward self to understand who she really is. It is also an incredibly nostalgic experience, both visually and by way of the mentality of the times. While the love between two people of the same sex is very much accepted in today's society, the 1950's were much less accepting and unforgiving. It can be quite distressing to see the way in which the character of Carol is treated by her husband and family and how she is not considered to be a fit mother by way of her sexual orientation, as well as the methods they employ to try and change her. This does seem distressing by today's standards, but it is an imprint of the way society thought in the 1950's and what was deemed acceptable. 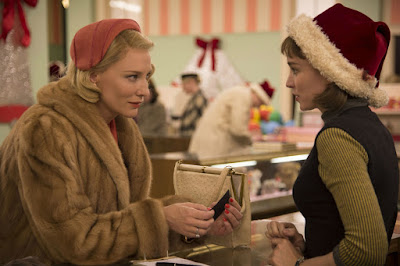 However, the nostalgia of the film is far more attractive in it's stunning visuals. The recreation of mid-century New York City is wonderful and incredibly atmospheric. The costume design by the acclaimed Sandy Powell is absolutely exquisite. The costumes are not only a fine representation of the time period, but they also are very character specific and, as is the case with Therese, they change to represent the development and change of character throughout the film. The cinematography by Edward Lachman is equally intriguing and works to give the film it's nostalgic edge along with it's wonderful use of colour. Lachman frames the main characters in certain shots in such a way that makes sure one is not distracted by anything that is not relevant to subject at hand.

The result of the marriage between Todd Haynes' direction of his two leading ladies and Phyllis Nagy's screenplay is phenomenal. Throughout the film there are some absolutely superb and memorable lines of dialogue which are relatable even if one is not in the same situations as the characters. One particularly beautiful quote from Rooney Mara's Therese is "I don't know what I want. How could I know what I want if I say yes to everything?"

Even though Carol is set in the 1950's, it is considered a modern idea to say yes to everything and have this open you up to a world of opportunity. Yet, Therese verbalises here that saying no is just as important as saying yes, as saying yes too many times does not distinguish your character or shape you as a person. The exquisite dialogue is not only accompanied by, but strongly supported by the simple actions of the characters that are not exaggerated, but speak louder about what the characters are feeling than words. A brief glance or a touch of the hand that does not linger says a great deal more about what they are feeling than their words say, but works together with what they do say to create greater emotion and understanding. 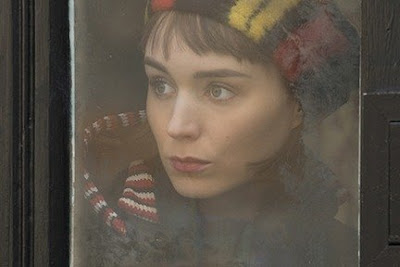 Both Cate Blanchett and Rooney Mara give incredible performances which are worthy of their Academy Award nominations. Blanchett's performance is intriguing as the older woman who displays the strong characteristics one would associate with the more powerful and experienced half of a couple. Yet she is also a very fragile woman who, as one finds out as the film goes on, is not as emotionally strong as she appears to be.

Even though Blanchett portrays the title character, Carol is just as much Rooney Mara's film. Mara shines as the young Therese who is unsure of her place in the world until she meets Carol. She has a pixie-like quality which makes her incredibly endearing and likable. She is a character many will see themselves in a she is trying to fit into what she believes society would have her be, but is destined to live a more meaningful existence.

On the surface, Carol is a beautiful film with it's nostalgic images and classy cinematography. Yet underneath it is just as beautiful with it's relatable themes that accompany an already deeply emotional story.