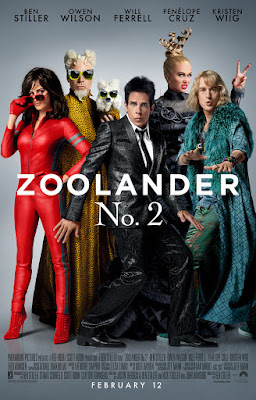 Zoolander 2 is perhaps not a completely unexpected disappointment. It was always to be a massive task recreating the success of the first film, especially when the sequel's screenwriters focused and tried too hard with the wrong elements, Instead of recreating the unique brand of humour displayed in the original film, Zoolander  2 is hardly funny and incredibly weak.

After years in a self inflicted exile, male model Derek Zoolander (Ben Stiller) comes out of hiding when he receives an invitation to make his comeback on the catwalk in Rome. He is reunited with his old friend, Hansel and the two discover that the world of fashion has changed a great deal. When they meet ex-swimsuit model, Valentina Valencia (Penelope Cruz), they find out that celebrities all around the world have been dying and using a past signature look of Derek's to communicate information regarding their killer. However, it all becomes personal when Derek finds out that his estranged son, Derek Jr. (Cyrus Arnold) is in great danger and he, Hansel and Valentina must find a way to save him.

There is no better way to describe Zoolander 2 than an absolute mess. It's screenplay is less of an actual story and more of a cluster of ridiculous one-liners and references to the 2001 film thrown together in no particular order. Ben Stiller and his co-writers, Justin Theroux, Nicholas Stoller and John Hamburg seem to have approached the writing of the Zoolander sequel in much the same way as most sequels are written, which is working with the elements that made the first film work. In this case, they got the idea of what worked in Zoolander completely wrong. Zoolander has become something of a cult classic because it was it was a satire of the modelling world that was clever and ridiculous at the same time. 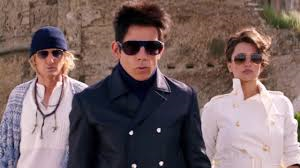 There is nothing clever about Zoolander 2. The story is incredibly weak because the focus is more on making the film as funny as it can possibly be and this is the reason that the film is not funny at all. Every single piece of dialogue and every scenario is just designed to be funny and instead is just irritating. The sad thing is that there are actually some moments in the film that would be laugh out loud funny if audiences hadn't been inundated with other things significantly less funny around it. More than laughs, Zoolander 2 induces more eye rolls with the things it wants you to find funny, many of which are incredibly predictable such as Derek discovering his son is not male model material.

The entire concept of a satirical look at the modelling world does not have the same appeal as it did fifteen years ago when it was something unique with a creative screenplay. One cannot help but believe that Stiller just waited too long to make a Zoolander sequel and the concept does not work as well in 2016 as it did in 2001. Despite the introduction of new characters and even the world of fashion which Derek and Hansel exist in having changed with the times, the whole concept just feels tired.

What was once considered funny about Derek Zoolander and Hansel now just feels overtly exaggerated and much too ridiculous. Admittedly, the only two performances in the film which one does feel comfortable watching are Billy Zane's and Cyrus Arnold's, who plays Derek Jr. Zane plays himself and his presence actually gives an enjoyable start to the film, while Arnold plays a moody teenager. The two are unforced in their delivery and it is a welcome change to every other performance in the film (except for Christine Taylor as Matilda's ghost). Every other character in the film is so incredibly over the top and exaggerated to the point of irritation, especially Stiller's Derek Zoolander who proves that exaggerating a character who was successful the first time round doesn't work.

Zoolander 2 is a film that should never have existed. The original film should have been allowed to remain a stand alone film and the name Derek Zoolander be met with fond memories. However, Zoolander 2 proves once again that the sequel is never as good as the first and lightening does not strike in the same place twice.