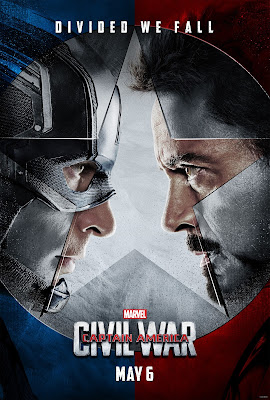 While Captain America: Civil War is a solid and entertaining latest offering from the Marvel universe, it can thank it's release date in large for it's critical and box office success.

Captain America: Civil War is more or less The Avengers 3 with the mysterious absence of The Hulk and Thor, and is not surprisingly wonderfully action-packed, but at the same time extremely busy in the way that these multi-protagonist films can be.

The Civil War in the film's title refers to the inner battle of the Avengers with one side being led by Steve Rogers/ Captain America (Chris Evans) and the other by Tony Stark/ Iron Man (Robert Downey Jr.). The trouble begins when after one too many destructive battles, the Avengers are put on notice by the American government and are prohibited to partake in activities without permission. Steve Rogers as Captain America has never had this type of restraint enforced on him and does not believe that the group of superheroes should agree to this, while Tony Stark, who has distanced himself from his alter ego of late for personal reasons, believes otherwise. Things become even more complicated and heated between the two when Steve's lifelong best friend, Bucky Barnes or the Winter Soldier (Sebastian Stan) is convicted of a terrible act of terrorism, but wants to defend him. With the Avengers now being sliced into two, the biggest battle they face is against those who they has always fought alongside. 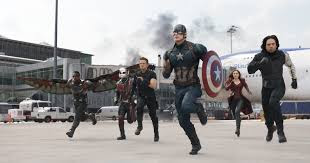 The idea behind Captain America: Civil War is one that seems to be an obvious one to bring the cinema crowds in and make large box office figures. The Avengers saw the coming together of the biggest superheroes in the Marvel universe, while in Captain America: Civil War we see them falling apart. However, this is an example of the filmmakers giving the audience what they want to see and that is the Avengers (plus some) fighting among themselves to determine who really is the most powerful superhero. If it wasn't for an enemy who involves Captain America more than the other characters, this would almost certainly be a film for the Avengers series.

So one may say that the title of the film is misleading as this is a film only about Captain America in part, but it is the perfect strategy from Marvel on the back of Warner Bros DC film, Batman v. Superman: Dawn of Justice. Captain America: Civil War has been marketed as Captain America v. Iron Man and the poster for it looks remarkably like that for Batman v. Superman. So this is Marvel's answer to it's rival's blockbuster and it was the perfect move to release it a month after rather than at the same time. Marvel and Disney would not have known that Batman v. Superman would be such a let down for the large majority of movie goers, but they would have been ecstatic to find out that it was. Here is the film that audiences wanted Batman v. Superman to be, the battle between two superheroes who should be friends but are at odds with one another with a good reason to be.

Captain America's screenplay is more superior than it's DC counterpart with it's twist at the end being less cringe-worthy and more clever. However, it does play victim to that of all multi-protagonist films as it is not able to cover as much from each character as it is attempting to and as a result forfeits emotion and inner turmoil. 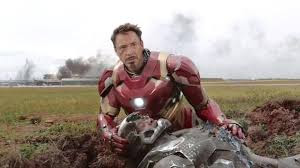 Despite this apparently being his film, Captain America is not fleshed out in the way he should be. After the beginning of the film when he loses the love of his life, Steve Rogers as Captain America exposes himself as a man who refuses to answer to anyone and is a born leader. These are usually admirable features in a man, but in this film he just seems selfish, disloyal and childish. His loyalty extends to only one person and not to his country and their rules, which is ironic considering he is Captain America. He goes against protocol and loses his friends in the process, therefore not showing loyalty to his team. The subplot with he and Sharon Carter (Emily VanCamp) is also extremely weak and has next to no time donated to it. Chris Evan's superhero shows no signs of remorse or inner turmoil despite the conflict and rift he has created and this is by no means Evans' fault as it is the way his character was written.

On the other hand, Tony Stark/ Iron Man is far more interesting as he is a character with greater depth. From his entrance in the film where we see a much younger Robert Downey Jr. in a flashback scene, the audience see's a man who is at war with himself and is greatly wounded by the distant and recent past. The final confrontation between himself and Captain America is emotionally charged from his side and shows how much his character has developed over the course of the Marvel films.

Scarlett Johnasson once again exhibits the strength needed to play a character like Natasha Romanoff/ Black Widow. Black Widow has always been an intriguing character who deserves her own film as she is so strong a character that she could easily carry a film by herself. On the other hand, it almost seems as though the screenwriters were unsure what to do with Elizabeth Olsen's Wanda Maximoff/ Scarlett Witch. Her character in this film would have been the perfect chance for the writers to flesh out the emotional anxiety experienced by those in the same position as the Avengers who deal with the deaths of innocents each time they go to battle. It is definitely touched upon, but not fleshed out which is how it should be if the issue is to be addressed at all.

The introduction of Tom Holland's Spider-Man or Peter Parker into the Marvel universe is one which is finely done and an excitement for what is to come is created. Holland is endearing in the way that a young superhero testing his boundaries should be and makes a solid first appearance as the superhero. Paul Rudd returns as Scott Lang AKA Ant-Man and brings back with him the his likable, every man persona which brings a lightness to the film which is needed.

Yet, one does not go to see a Marvel superhero film for it's depth and powerful emotion. The whole point of a superhero film in the eyes of most movie goers is the action, which is were the superheroes do what they do best. There is indeed a great deal of action and impressive special effects right from the beginning of the film. Yet much of the camera work which is supposed to reflect the high pace and intensity of certain scenes (in particular the opening scene), is too quick and jerky for one to be able to have a clear grasp of what is happening. The editing in these scenes is rather erratic and too fast moving, but it is acknowledged that if they weren't so high-paced the film would have been even longer than it's 146 minute run time.