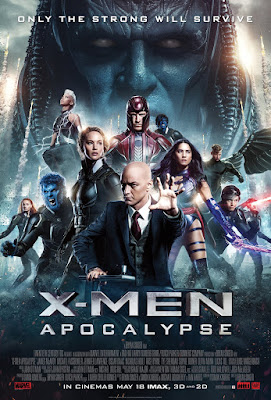 X-Men: Apocalypse is now showing in Australian cinemas and is distributed by 20th Century Fox. To be released in the United States on May 27.

Just like the characters in the movies themselves, the X-Men franchise is truly one of a kind when it comes to the Marvel universe.

Juggling more than one protagonist in any given film is a complicated mission, let alone in a superhero action film as recent films of this genre have proved. Yet this has never really been a problem for the films of this Marvel franchise and X-Men: Apocalypse continues this tradition. Bryan Singer's fourth X-Men film is extremely character driven with themes that members of minority groups will be able to greatly relate to, but does not substitute emotion for exciting, high-paced and impressive action.

10 years after the group of mutants known as the X-Men were brought out into the open, much has changed in their lives and although mutants are greater accepted into society now, the more noticeably different are still treated as freaks. Professor Charles Xavier (James McAvoy) has opened his school for the gifted and it is one of his young students, Jean (Sophie Turner) who first sees the coming of the end of days. True to her vision, the being known as En Sabah Nur or Apocalypse (Oscar Isaac) rises to take the world as his own and cleanse it of humanity as we know it. He recruits mutants for his cause including the wounded man who tried so hard to leave behind who he was, Erik Lehnsherr or Magneto (Michael Fassbender). Xavier and his most powerful students and allies including Raven/ Mystique (Jennifer Lawrence) take on this threat to mankind and also attempt to convince Magneto where he belongs. 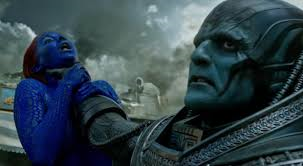 What so many superhero films struggle to do in cinema these days is to find a way to reach out and tap into their audiences emotions while giving them spectacular entertainment in the form of action and special effects. X-Men: Apocalypse is one of the first hero films in a significant amount of time to be able to do this. The foundation which the whole franchise is built on is that of people who are physically or mentally different struggling to fit into society, which despite some of the fantastic mutations the X-Men have is something that many will be able to relate to and feel strongly about. Jennifer Lawrence's Raven puts it perfectly when she says that all may be happy and mutants readily accepted in Westchester, but out there people are still suspicious and non-accepting. The word "mutant" and destination of Westchester could be interchanged to incorporate any type of difference and any place where it is more accepted than others. There will always be groups of people who are afraid of what is different, but what X-Men also reminds us is that these minorities should never feel alone and that their families are not always people they are related to. Raven/ Mystique is also a wonderful example in this film of how sometimes by just being yourself and showing your difference, you are inspiring others who can relate to you even if you are often unaware of doing so.

X-Men: Apocalypse is also not afraid to shy away from more overt powerful emotions. Because of their mutations, characters such as Charles and Erik either intentionally push away the ones they love or lose their loved ones due to their point of difference. Both cases have particularly strong moments in the film which make one deeply feel their pain due to superb performance by both James McAvoy and Michael Fassbender. However, X-Men: Apocalypse doesn't remain serious and solemn for the full extent of the film as, like it's predecessors, Singer and screenwriter, Simon Kinberg have been able to incorporate some extremely amusing moments into the film. Although the film isn't completely free of some corniness, there are some very clever and witty moments of dialogue and Quiksilver's (Evan Peters) "Sweet Dreams" scene is absolutely hilarious and memorable.

One of the only things that lets X- Men: Apocalypse down is the lack of a convincing villain which is a foreseeable problem to have at this stage of the franchise. The X-Men are an extremely strong unit when they are placed together with all of their abilities and the films need to produce exceptionally strong villains that can have an unpredictable and convincing battle with this large group. Therefore, the writers have resorted to a character who represents the end of the world to take on the group of heroes. Apocalypse, as portrayed by Oscar Isaac, starts off as an intimidating presence, but his impact decreases throughout the film and he appears to be more of a run-of-the-mill bad guy than the danger who could potentially end the human race. Yet, the final battle is fantastic in it's computer generated extravagance and well-choreographed combat sequences. 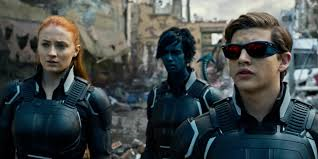 As X-Men: Apocalypse is so character driven, there are some very well fleshed out and interesting personalities which are heightened by strong performances. As previously stated, both McAvoy and Fassbender give wonderful performances though vastly different ones. Fassbender in particular is superb as a very different Magneto than we met back in X-Men: First Class as he is now walking wounded and very much a tormented soul that was once softened by his family. Jennifer Lawrence does fine with her reprisal of Raven/ Mystique who is still coming to terms with her physical mutation, but is also a type of celebrity in her natural blue form.

With this film comes a handful of exciting new players who are revisiting roles from the earlier X-Men films. Sophie Turner shakes away her "Game of Thrones" persona and gives an extremely convincing performance as Jean Grey where she reaches her peak towards the end of the film. Tye Sheridan starts the film giving an atypical moody teenager performance as Scott Summers (better known as Cyclops) but his character evolves to capture emotional depth as the film progresses. Evan Peters' Quicksilver had a small role in 2014's X-Men: Days of Future Past, but makes a much greater impact here and his is a character to get excited about. Peters has a fantastic on-screen presence and buckets of charisma which make him a character one greatly looks forward to seeing in future films. On the other hand, Olivia Munn's Psylocke has very little to do despite her prime location on the film's poster. One suspects she will have more to do in future X-Men films, but she is an incredibly empty soul in this one.

X-Men: Apocalypse once again proves that it is one of the best superhero franchise films in cinema at the present time with it's healthy balance of the dramatic and the fantastic. It's ability to be able to handle a number of protagonists and introduce new and exciting characters is outstanding and makes for a whole lot of enjoyable and impressive entertainment.