Hunt for the Wilderpeople (2016) film review 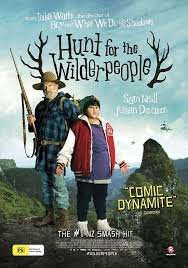 Hunt for the Wilderpeople is now showing in Australian cinemas and is distributed by Madman Films.

Just as it begins it's cinematic run in Australia, Hunt for the Wilderpeople has claimed it's prize as one of the most successful New Zealand made films of all time and it is understandable why. Taika Waititi's new take on the self discovery adventure film is incredibly charming and effortlessly funny with view of New Zealand that has never been seen in cinema before.

"Bad egg" Ricky Baker (Julian Dennison) is a thirteen year old juvenile delinquent who has just about reached the end of foster home choices from child welfare services. When he comes to live with the excitable Bella (Rima Te Wiata) and her reserved husband, Hector (Sam Neill), it seems as though Ricky's life has finally taken a turn for the better. Tragedy soon strikes and an unusual turn of events leads to Ricky and Hector, who never really took to each other, being along together in the wilderness. A nationwide manhunt for the two begins as the whole country believes the worst about the two and what their time together means.

Hunt for the Wilderpeople is crafted with absolute sincerity in it's story, characters and the land in which it is set. From the very beginning as the aerial camera pans across the incredible landscape of the New Zealand wilderness, the film is immaculate in it's execution of it's fun and enjoyable screenplay with it's well-rounded, memorable characters. The film is moving, but at the same time flows so naturally and is so engrossing that one does not realise how much you come to care about the outcome and the characters (particularly Ricky Baker) until the climax. 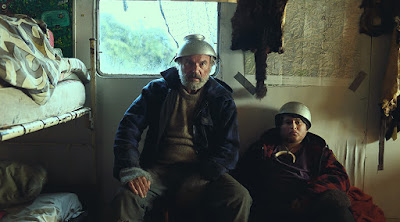 Waititi's film breathes new life into what is becoming the self-discovery adventure film sub-genre, which is so often characterised by a bonding experience between two people and a journey usually in the form of a road-trip. The most obvious point of difference between Hunt for the Wilderpeople and any other film it could be compared to is the location of the New Zealand wild with many locations never before seen on film. Ricky and Hector's journey takes them to some truly beautiful places in the wild such as the stunning mountain landscapes and their icy peaks. The cinematography used to optimize the beauty of these places is absolutely exquisite and a love easily develops for the country of New Zealand as seen through the eyes of the filmmakers and the characters.

However, it is all in the story and the characters that makes Hunt for the Wilderpeople so wonderously unique. The story of how these two misfits come to travel together in an unplanned journey that soon turns the two of them into fugitives is original in itself, but it is Waititi's mode of storytelling that makes it such an utter delight. The story is unpredictable and riveting with a sense of humour which spurs it along and makes it all the more enjoyable. Waititi's comedy is sprinkled through the film with what feels like a great deal of ease and is natural and clean, but at the same time absolutely hilarious. Humour is found not just in the adjustments Ricky and Hector need to make to survive in the wild, but also in the pursuit their arch nemesis' including Paula Hall (Rachel House) undertake to find the two.

Hunt for the Wilderpeople is exceptionally character driven. Each of the characters in the film have a distinct personality and they are all so enjoyable to watch as a result of all the cast giving strong and convincing performances.  Julian Dennison's portrayal of Ricky Baker is incredibly inspired. Again, how much one cares for Ricky is not even realised until near the end of the film when you realise how you've come to sympathize with him more and more as the film progresses and you learn about him and his background. Through getting to know him, you realise that Ricky really isn't a bad egg and that he is just looking for love and stability like so many others in his situation. It is so wonderful to gradually come to care for a character so much without acknowledging that it is happening, 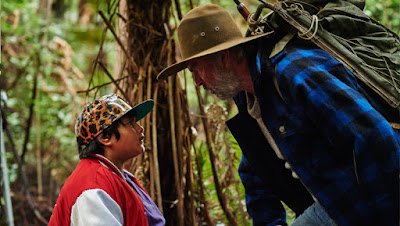 Sam Neill's Hector is full of mystery and has a great deal of character. He is another who may not seem particularly likable at the beginning of the film, but is greatly cared about by the end. Rachel House who plays child welfare officer, Paula Hall is formidable in the most comedic of fashions and newcomer, Tioreore Ngatai-Melbourne steals every scene she is in as Kahu.

Taika Waititi appears in his own film as the priest at the town's parish and is the most amusing priest on film since Rowan Atkinson's character in Four Weddings and A Funeral. There is then one of the most random and superbly ridiculous character's of the film, Psycho Sam as played by Rhys Darby. Psycho Sam is there as a character to basically join the dots and provide Ricky and Hector with the means to have a chance at beating the odds,but provides perhaps the biggest laughs in the latter half of the film.

Hunt for the Wilderpeople is a complete joy to watch and a film you don't realize you truly fell in love with until the end.