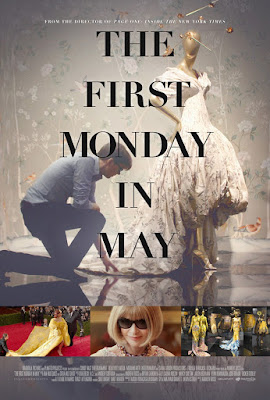 The First Monday in May is now showing and is distributed in Australia by Madman Films.

With one of the biggest events on the fashion calendar now behind us for another year, The First Monday in May provides an in-depth look at and the meaning behind the prestigious Met Gala in what is indeed the film fashion event of the year.

Every year on the first Monday in May, the Met Gala or otherwise known as Met Ball is held at New York's Metropolitan Museum of Art and brings together some of the biggest names in fashion and celebrity from around the globe. The film follows the infamous Anna Wintour and her team of Vogue minions as they work tirelessly on the finer details of the night including the extravagant decorations, designer and celebrity guest list, seating arrangements and the ridiculous costs of having Rihanna perform "Bitch Better Have My Money".

However, it is the opening of the Met's Costume Institute's annual exhibition which is the reason behind the extravagant festivities. With the late Alexander McQueen's "Savage Beauty" exhibition being the Costume Institute's most attended in history, curator Andrew Bolton is faced with the task of trying to break free of the stigma of every exhibition being compared to that of 2011. The ambitious 2015 exhibit, "China Through The Looking Glass" was a look at how China has influenced fashion designers over the years and involved Bolton travelling to China for research as well as to meet with those who were not sure the exhibition was depicting China in the correct way. 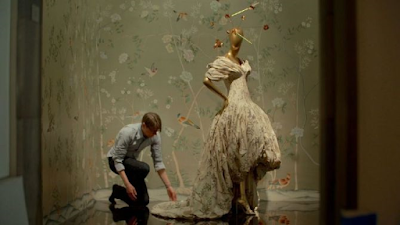 At the heart of The First Monday in May is the debate as to whether fashion is art and the contradiction that the Met Ball presents. Although this theme would have been a much contemplated one among those who work in the fashion industry, it is explored in an interesting and informative way for those who are not as much inclined. The way in which Andrew Rossi explores the argument for and against fashion being art is intriguing. His account is quite bias, but at the same time he allows Andrew Bolton, Anna Wintour and various designers to explain that like any type of art, when used for a commercial sense it loses it's artistic integrity. Hence the question of whether bringing celebrities into the realm of fashion decreases its credibility of art and or increases it's recognition and here is where the contradiction of the Met Gala is. The film is an interesting study of this, but it is the financial initiative that the marriage of art and commercial gives the Met's Costume Institute that allows for the question to be momentarily ignored.

Like all great documentaries, one comes away from The First Monday in May feeling a great deal more informed about both the world of fashion, the Met's Costume Institute and the organisation of such an extravagant event as the Met Ball. Due to the cult of celebrity which is always evident in society, the Met Gala receives a great deal more global recognition than the exhibition which it is celebrating. The First Monday in May attempts to cover both areas of the celebration, but is more inclined to discuss the creation of "China Through The Looking Glass" the exhibition in greater detail. From the history of the institute and their exhibitions to the selection of items to be exhibited and challenges presented along the way, each step of the organisation is presented on film with both class and care. This is a positive thing as one feels richer in cultural knowledge because of the film, rather than feeling as though they have watched a film version of the fashion pages of a tabloid magazine. 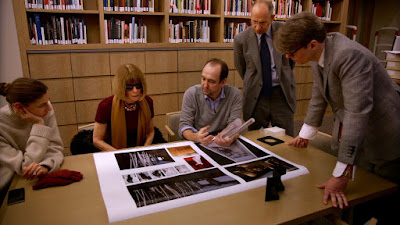 Yet at times the film can also feel like a instrument of Anna Wintour (who is more or less a celebrity herself by default) worship and as though it is a follow-up piece to 2009's The September Issue. However, Wintour's sharp, blunt wit does provide some comedic moments during the film which are heightened by her well-known reputation for being a hard and direct, but tremendously respected businesswoman.

Of course, there is then the glorious fashion in the film which is breath-taking to both those who are fashion minded and those who are not. The way in which the exquisite fashion from names such as McQueen, Galliano, Ford and Valentino is captured on film is extraordinary and one can only imagine how wonderful the collection would have looked on display in the museum. The First Monday in May provides a rare treat and opportunity to explore the behind the scenes of the exhibit preparation where the discovery and preparation of the pieces for the exhibit are also a thing of beauty and one feels the awe that Bolton is experiencing as he beholds some of the most iconic pieces in fashion history for the first time. There is also wonderful archival footage of past fashion shows featuring incredible costumes by the geniuses of the fashion world and classic film featuring beauties such as Anna May Wong who gave the world some of the more exquisite onscreen fashion moments.

Don't be fooled, The First Monday in May is much less about the celebrity studded Met Gala as it is about the actual exhibit which it is celebrating and the art culture behind the world of fashion. An enthralling and visually spectacular piece of documentary film.