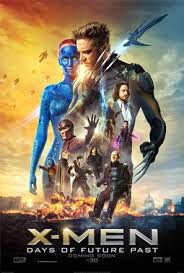 X-Men: Days of Future Past is the film all X-Men fans have been waiting for with bated breath. The idea of the old joining the new in one film is extremely exciting for any fan of the franchise, but also a very worrying one as it is an extremely ambitious and potentially complicated task for any filmmaker to successfully undertake. Luckily, director Bryan Singer and the writers have overcome the potential continuity problems that were foreseeable in such an endeavour and have created an entertaining and enjoyable superhero film. More for X-Men fans than not, X-Men: Days of Future Past has a clever script and suspenseful action sequences which are only intensified by the performances of the outstanding cast.

Due to the actions of the mutant Mystique (Jennifer Lawrence) in the 1970's, the future of both human and mutant are in doubt as Earth has been taken over by Sentinel's, which were initially made to rid the world of mutants. Professor X (Patrick Stewart) and Magneto (Ian McKellen) decide that the only way to save the world from these machines is to send someone back in time to stop Mystique from killing the Sentinel's creator, Dr. Bolivar Trask (Peter Dinklage) and setting the wheels of destruction in motion. They choose to send Logan/ Wolverine (Hugh Jackman) back to find the younger versions of Charles Xavier (James McAvoy) and Erik Lenhsherr (Michael Fassbender) and alert them to what is to come if they do not stop Mystique.

It is an absolute dream come true for X-Men fans to be treated with a film like X-Men: Days of Future Past. To be able to have the original Professor X and Magneto in the same film as the younger versions of themselves and be joined by other X-Men favourites such as Wolverine, Mystique and Beast just seems too good to be true. The concept itself was actually quite worrisome, as there were foreseeable problems in regards to continuity and the overcrowding of characters in the film. These problems are successfully overcome as a result of a strong and smart screenplay. The joining of all these characters in the same film is very well done and continuity problems solved in slick and smart fashion. The first scenes which are shot in the present do feel quite rushed and are in a hurry to explain things so they can return to the past where the film solidifies. After this time travel takes place, at no point does it become predictable or dull as it is constantly moving towards a tense and explosive finale. This film is probably one of the better superhero films in recent times as it encompasses all the elements which make a great film, not just a great superhero film. The outcome of the film is something which has not been seen before and changes the rules of it's franchise and for it's future films. 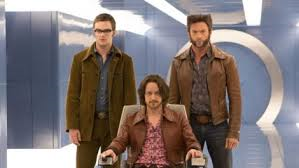 Being that X-Men films have been gracing our cinemas for 14 years now, there is a great deal of reference to past X-Men films which people who have seen the past films will understand and obviously those who haven't won't. It is fair to say that it is the already existing X-Men fans who will enjoy this film a great deal more than those who are not. It is impossible to get this far into a franchise and audiences not be expected to take just a little bit of back information in with them. So for those who haven't seen the past films, there is a tiny bit of information given about the past films, but not a great deal so much of it will not make any sense. Yet, if you just watch X-Men (2000) and X-Men: First Class (2011) than you have most of the information you need.

X-Men: Days of Future Past may not have as many explosions and extreme action scenes as many other films in it's same genre, but the scenes which are the most intense are very impressive. The special effects in the opening scenes and when Erik/ Magneto unleashes his fury are fantastic. The cinematography in the Pentagon when Peter/ Quicksilver does his work makes the scene incredibly fun. The make-up used for Mystique and Beast are very well done and the costumes depict the time period perfectly.

The great thing about all of the X-Men films which sets them apart from so many other genre films is that they rely so greatly on character. There is always a great amount of character to all of the X-Men characters. Their mutation is just the beginning of what sets them apart from each other, they are all different in behaviour and emotion. These distinctive characters have wonderful and acclaimed actors portraying them which makes them all even more exciting. Hugh Jackman, James McAvoy, Michael Fassbender, Ian McKellen, Patrick Stewart, Jennifer Lawrence, Halle Berry, Ellen Page and Nicholas Hoult all return to the roles they have played in previous X-Men movies.

Hugh Jackman is as ever charismatic as Logan/ Wolverine. He is a complex character, but one which the viewer loves. Jackman gives a hard exterior as Logan, but softens and shows his emotional side when heading towards the end. James McAvoy is wonderful as Charles Xavier. He plays a broken man in body and soul, who struggles with finding his way. His performance is heartfelt, but rough around the edges giving even more depth and personality to his character. Michael Fassbender is once again superb as Erik/ Magneto. Erik is a man with a tremendous amount of hurt and pain which he carries around, and that has been turned into vengeance. Fassbender does bad so very well. He is so subtle in his delivery and terrifyingly so.

Jennifer Lawrence has a very physical role as Mystique in this film, and even though her face is behind blue paint the large majority of the film and very rarely is shown without make-up, she still conjures a great amount of emotion in her key scenes. Peter Dinklage also does very well, as do Patrick Stewart and Ian McKellen, particularly in their final scenes together. It is a shame that Anna Paquin's Rogue received an incredibly small amount of screen time, as she would have been as great addition to the journey.

X-Men: Days of Future Past is quite possibly the best X-Men film thus far. It gives endless possibilities of what is to come in future films of the franchise by doing something truly different and changing the rules completely.