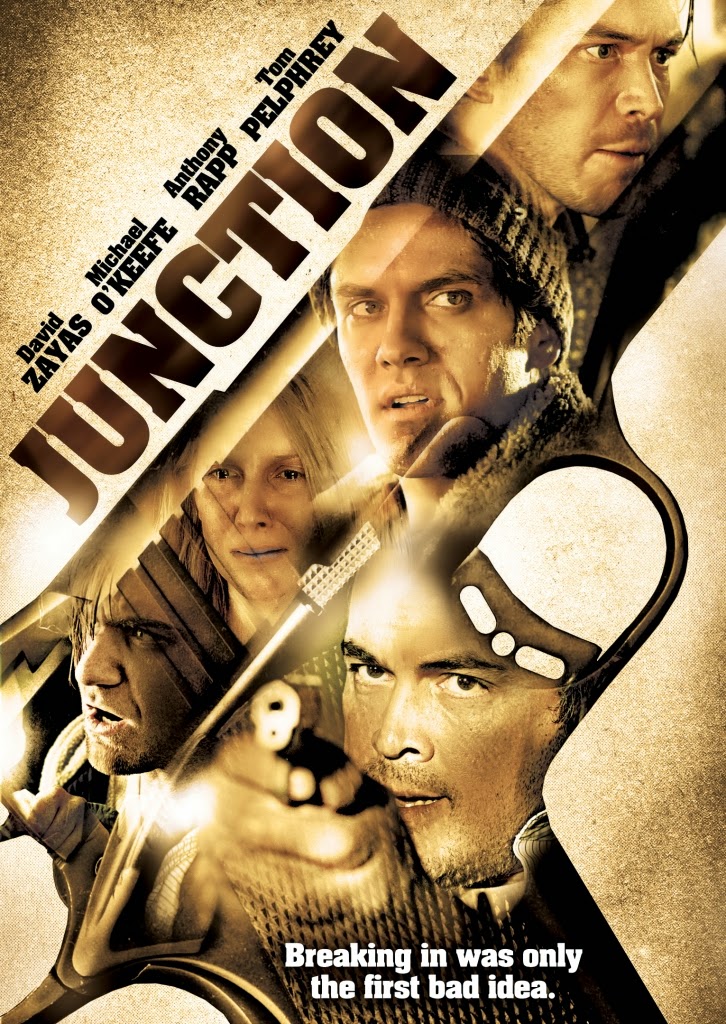 Junction is one incredibly tense ride that makes you question where to draw the line with personal responsibility. It is the type of psychological thriller that plays high intensity mind games with you, but separates itself from other streamlined thriller films by venturing into the often taboo area of meth addiction. Tony Glazer has done a superb job at constructing an incredibly tense film which addresses more than one problem in todays society and making us question what we would do in such a situation.

Four strung-out meth addicts, David (Tom Pelphrey), Kari (Summer Crockett Moore), Donald (Neal Bedlsoe) and Spot (Harris Doran) are under the instruction of Tai (Anthony Ruivivar) to obtain a television in exchange for what they want. The four break into a house who's residents have just moved into in order to steal their flat screen television, but make a horrifying discovery in the process. While their minds are clouded by addiction, they all must make the decision to either walk away or take matters into their own hands.

Junction is an extremely unique psychological thriller. While the idea of ordinary citizens facing ethical dilemmas involving crime may not be a new one, the idea of an existing addiction illness playing part in this dilemma is unique. Everything is heightened within the film because of the main characters inability to stay calm in the situation as a result of their illness and this proves to be a dangerous combination in the situation. Their perception of reality is clouded over and their ability to remain calm in such a situation and not over react is almost non-existent. It is a scary look at meth addiction, but also works as a way to make the film even more intense than it would have been without it.

The film challenges you to put yourself in the shoes of the characters as they sit upstairs in the attic when they make their discovery. The obvious answer would be if you saw someone doing something like in the film you would absolutely go to the authorities, but what if you were already doing the wrong thing and to report it meant you were putting yourself up for arrest? It's an interesting thing to ponder, but then you always have to remember that most of the characters are not thinking in rational terms to begin with. The ending may be slightly predictable, but it is forgiven as, as any motivational quote will tell you, it is the journey that matters. Junction is also visually intense. It may not show the act which is so often discussed, but it is quite graphic and violent during the hostage scenes.

There is some wonderful acting here in Junction. All for of the main stars do a great job portraying people with a terrible addiction who are placed in a situation none of them is equipped to handle. Having to deal with confronting subjects like the ones here is a gruelling and emotional task and all do very well here in portraying people directly affected. Neal Bedsloe and Harris Doran are particularly good as Donald and Spot. These are the two who lose control the most in the film and they are so believable and the two of them are really quite terrifying in their characters. Little Danielle Kotch who plays Mia, the young girl at the centre of it all is one to keep an eye on as she has a big future ahead of her.

Junction makes you question where your responsibility as a citizen begins and ends and how far you will go for that responsibility. Highly addictive viewing.