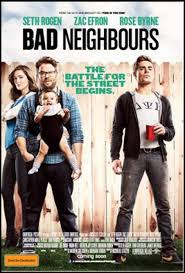 There is no denying that Bad Neighbours is funny. However in order for it to be a laugh a minute, it does require that certain sense of humour often associated with the majority of Seth Rogen comedies.The film does attempt to have some depth to it by drawing on experiences which many can relate to, but it loses much of it's depth in it's comedic style. Yet for those who don't mind the occasional (or twenty) penis jokes, they will be willing to overlook the lack of intended depth and enjoy a whole lot of laughs.

New parents, Mac (Seth Rogen) and Kelly (Rose Byrne) Radner are still trying to adjust to their new lives with a little person in the house when to their horror, the home next door becomes a fraternity house. They start off on good terms with the frat president and vice president, Teddy (Zac Efron) and Pete (Dave Franco), but after one loud party too many, things take a turn for the worse. The Radners and the frat boys declare war on each other and it is a fight to see who will leave the neighbourhood first. 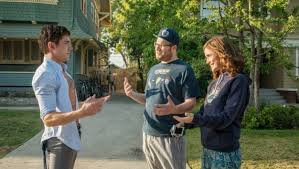 Bad Neighbours can be hilariously funny at times and it is at these times that the humour is for everyone. Yet then there are the moments which are definitely not for everyone as the jokes cross the line to become crude, as there are a tremendous amount of drug and sexual references. Anyone who considers themselves a prude will not be impressed by much of the humour in this film A lot of the humour and dialogue is what we have come to expect from a typical Seth Rogen comedy. None of the comedic dialogue from Rogen or Rose Byrne sounds particularly original and it is in the live action of the film where the majority of the humour comes from.

Yet, there is some depth in there. While Bad Neighbours is first and foremost about a street war, it also has a very real backbone to it. Mac and Kelly are in a stage which most new parents go through where they are trying to adjust to the lack of sleep, lack of quality time together and a complete lifestyle change. In many ways they envy the younger people next door and crave their lifestyle, but would give up their (very cute) little girl for anything. On the other hand you have Teddy who is enjoying a life of partying and not ready to give that up to become "old and boring". Again, these are feelings many people experience when leaving one stage of life and moving to the next. They are not ready to let go, but know that they will have to one day. The outcomes for these two dilemmas faced by the lead characters are fairly predictable, as would be expected. It is a shame that much of the depth is lost by trying to make it appear as funny as possible.

Seth Rogen and Rose Byrne's Mac and Kelly are not the most likable of lead characters. While the boys next door are probably doing worse things in general, the Radner's ways of getting even with them seem even more juvenile and brutal than their payback methods. Of course these two are supposed to be overtired and frustrated parents which doesn't add to the mix, but they just miss the likability boat. Rogen and Byrne's chemistry is perhaps not mind blowing, but does have it's positive points. Director, Nicholas Stoller seems to be going for the idea of the two being married people who are still best friends with each other and love each other's company. The script does absolutely grasp this concept, but on screen the dialogue between the two can often be irritating at times and then seem very rehearsed at others.

The frat boys on the other hand may be gross and immature at times, but they are perfectly believable frat boys as a result. Zac Efron's Teddy and Dave Franco's Pete actually come across as a lot nicer people than the Radners. Much of their behaviour will be relatable to those who have been involved with a fraternity or been in a sorority observing their behaviour. Zac Efron plays a fairly generic part, but he does have moments during the film when you glimpse how much acting ability he really has and that there is still some extremely exciting things for him in the future. The same goes for Dave Franco. While the role doesn't call for much versatility. he doesn't disappoint with what he has been given. One of the stand out moments of the film is the De Niro party and Franco's imitation of Robert De Niro is spot on.

While Bad Neighbours as a whole may not be the film for everyone, it does have it's memorable moments. It is absolutely not easily forgotten, whether you are a fan of the whole film or not.