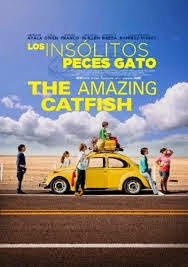 The Amazing Catfish is now screening at the 2014 Australian Spanish Film Festival nationwide. For more information and for venues and ticketing, please see the official website.

The Amazing Catfish is a sweet, but heartbreaking film about family and friendship. With some gorgeous techniques which makes you see the everyday in a completely different light,  Claudia Saint-Luce gives us an emotionally in depth look at a family who see grief in their future and the mechanisms each of them use to cope. As heart warming as it is heartbreaking, it makes you want to go home and hug your loved ones a little tighter.

Claudia (Ximena Ayala) is a very lonely girl. When she is admitted to hospital with appendicitis, she is placed in a bed next to a terminally ill woman named Martha (Lisa Owen). Martha's life is the complete opposite to Claudia's, she has four children who are all committed to making sure they are with their mother till the end. When Claudia is released from hospital, Martha and her family find her walking home and insist that she eat with them and then they will drive her home. Claudia find herself being drawn closer to the family as her life gets a little less lonely day by day.

The Amazing Catfish will feel very real to many people. There are so many facets of this film which are exceptionally realistic from the underlying themes to it's visual production. The film shows Claudia who is an introvert from her period of loneliness and does not know how to associate with others, but she becomes close to a family who need her in their lives as much as she needs them. However much she tries, she knows she can never be part of their family (as is seen throughout the film when she is quite often unintentionally forgotten about), but she is the person who has come along at the time when the family most needed her and being part of the family comes naturally to Claudia even after such a long period of being by herself. In Martha's family, there is a great display of family dynamics as well as each family member's way of copying with the inevitability of their mother's death. Alejandra (Sonia Franco) tries hard to be the mother of the family, but also wants to keep her independence and maintain a life outside her family, while Wendy (Wendy Guillen) jokes around and laughs, but she has a hidden grief which she feels no one cares about or understands. For those who haven't gone through a situation such as this, it is very interesting to see how people act when they know what is ahead, but for those who can relate to Martha's family it will be an emotional viewing to undertake. 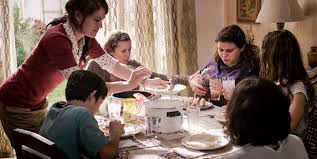 The visual side of The Amazing Catfish is exquisite, particularly in it's opening moments. The cinematography allows as to play witness to Claudia's loneliness even before she leaves her front door. A close up of her unthreading cloth and then removing the purple ones from her breakfast cereal show the tiny ways she is amusing herself, and these things which are often seen as monotonous tasks in everyday life are suddenly seen in a new way.

Ximena Ayala plays Claudia with warmth and depth. She has the audience's sympathy straight away when you play witness to her solitude. She has wonderful character development throughout the film, as she doesn't take a swift move from being quiet to happy and loud, but she maintains part of her introversion throughout the whole film and only gives a little piece of herself at once. Lisa Owen is the perfect mother in Martha. Although she is dying, she still puts her children before her. Her progression of weakness throughout the film is very good. Wendy Guillen is completely lovable and your heart breaks for her when you find out what she is really going through.

The Amazing Catfish is a beautifully emotional experience. It gives you a deeper appreciation for the finer things in life through it's depth and perfect use of cinematography.