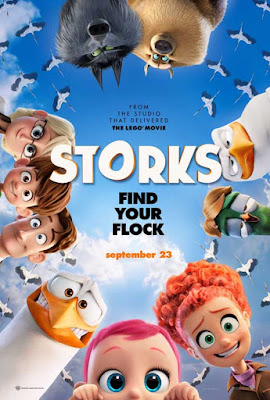 Much like the bird that is it's title, it feels as though Storks has completely flown under the radar this year. This new and original film has arrived in cinemas with perhaps not as much fanfare as other family animations which makes how enjoyable, hilarious, relatable and touching Storks is even more surprising.

You may have noticed that with so many other methods now available, storks no longer deliver babies. Instead, they deliver telecommunication devices from the online company, Cornerstore.com which is a great deal more practical. Workaholic stork, Junior (voiced by Andy Samberg) has just been offered the much coveted boss role , but first he has to fire the only human in the factory who was also the last baby that was attempted to be delivered, Tulip (Katie Crown). Junior and Tulip accidently re-discover and reactivate the Baby Making Machine leading to one little adorable baby being created. The two have to deliver this bundle of joy as quickly as possible so Junior can save his promotion.

Storks is a real breath of fresh air. With a completely original screenplay by co-director Nicholas Stoller, Storks takes a concept that doesn't seem overly interesting and makes it far funnier and more relatable than it should be. When compared to the other animated film that is currently in Australian cinemas for the school holidays, Storks gets right what The Secret Life of Pets got wrong. Both will entertain younger audiences just fine with their simple storylines and cute characters, but Storks will also completely win over older audiences.

Adults will find a great deal of enjoyment in watching scenarios unfold during the film that are so familiar to them as both workers and parents. Many of the amusing scenes in Storks are based on situational humour (which some younger members of the audience may not understand) with a slice of random humour in there for good measure. There will be no parent in the cinema who will not be able to see themselves in the film's characters at least once, especially when Junior and Tulip are attempting to get the baby to sleep and keep her asleep. Yet while these are the scenes that will make people chuckle, these are also the moments that will bring a tear to your eye as they are so touching. The ending is particularly true of this and anyone who has had to wait for a child to come into their life will be moved by the visuals accompanying Vance Joy's "Fire and The Flood". That adorable baby girl also shows the power cute babies have to make people go a bit silly at times.

Even if you are not a parent and feel that you cannot relate to this aspect of Storks, then you will definitely be able to relate to the workplace dynamics of Cornerstone.com. This idea of becoming the boss is one that is highlighted in the film. It's a job that everyone seems to want, but besides the usual perks like increased pay, so many people do not really know why they want to be the boss and cite that it "sounds cool" as their reason for wanting the job title. It's also not common etiquette to act excited when you are told you are boss, even though your brain is exploding. Then there is Pigeon Toady (as voiced by Stephen Kramer Glickman) who is the perfect embodiment of that over-the-top co-worker who is trying so hard to be friends that he is just creepy. Tulip's multiple personalities in the empty warehouse is also very amusing.

As cliché as it sounds, Storks really is a movie that the whole family can enjoy. It is a whole lot of fun with a load of laughs while still being moving and respectful.