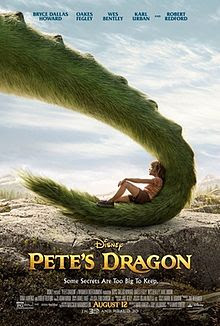 Pete's Dragon is now showing in the United States and will open in Australia on September 15. Distributed by Walt Disney Pictures.

Once again, another film enters cinemas this year that looks deceptively like a stereotypical remake. However, Pete's Dragon is only loosely based on the 1977 film of the same name with the only concrete similarity being that there is a boy named Pete who's best friend is a dragon named Elliot. Disney's new film has gone in the opposite direction of it's namesake and instead of remaking Pete's Dragon as the musical comedy it originally was, they have turned it into a family drama that is simple and quick, but incredibly sweet, loving and moving.

In the small Pacific northwest town of Mulhaven, there has always been stories of dragons in the woods, but with so little evidence they have never been proved to be much more than folklore. However, when a young, orphaned boy, Pete (Oakes Fegley) emerges from the wilderness, the town is shocked that he was able to stay alive living by himself for so long. Park ranger, Grace (Bryce Dallas Howard) is able to earn Pete's trust and he confides in her about his best friend, Elliot, which challenges everything she and most of her family has ever believed.

While vastly different films, Pete's Dragon can be likened to the 2016 Ghostbusters. Both may be classified as remakes, but neither primarily aspires to replicate the original on a bigger and better scale as stereotypical remakes tend to do. In both cases, the filmmakers use the originals only as inspiration to do something new and different with the story and this is what should be done with remakes. A remake should be a product of seeing an original opportunity in an old idea. 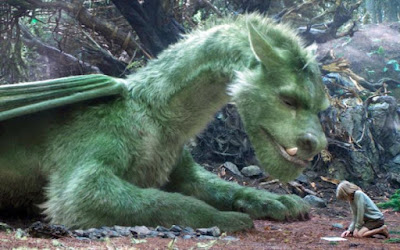 Although the 1977 Pete's Dragon is loosely classified as a Disney classic, the Don Chaffey directed film which starred Sean Marshall, Helen Reddy and Mickey Rooney is considered mediocre at best. David Lowery's film may be a very different film to the original, but is so superior in it's production that it has the power to become the more referenced out of the two in years to come.

The 2016 Pete's Dragon is a truly surprising experience. While the film seems quite quick as it takes place over only two days and the story easy and straight forward, there is a great deal of power behind it's simplicity. The film is filled with so much love which is transcended onto the screen in the sweetest of ways so that it would take a cold heart to not be moved by Pete and his dragon. The audience feels an instant emotional attachment to the two unlikely friends as a result of splendid character development (especially that of Oakes Fegley's Pete) and wonderful casting and direction. This attachment formed between character and audience is one of the things which makes Pete's Dragon extremely moving. The soundtrack for the film is also beautifully utilised to give greater depth and understanding to the situations at hand.

In an age where CGI is such a dominant feature in mainstream Hollywood films, it takes something special to be truly surprised by the phenomenon these days. The CGI development of Elliot is outstanding, but not in the way it traditional sense. Elliot has been constructed with so much love that he is immediately likable and it is easy to forget that he is not a real being that is being filmed alongside Fegley. He is the perfect mixture of pet and best friend and while the idea of chemistry between an actor and a CGI created animal may seem impossible, it is certainly proved otherwise here.

This is a definite area of credit for Oakes Fegley. Acting alongside a CGI creation is often difficult and when this is so it transcends to the screen, but Fegley does a superb job of making us believe that he is really there with his best friend who just happens to be a dragon. Fegley's performance as Pete is one of the best by a young person of the year. Like Elliot, he is immediately lovable and empathetic. Fegley allows the audience to watch Pete go through some heavy emotions (such as hurt and grief, as well as the complicated notion of separation anxiety) in a way which is devastatingly real.

Bryce Dallas Howard also gives a performance which is just beautiful. Her portrayal of Grace is stunningly heart-warming and maternal. Robert Redford also does well as Grace's father, Meacham and makes the most of the screen time he is given. Karl Urban character of Gavin, who is the film's villain, is perhaps the only let down. He comes across as corny and over-exaggerated without a hint of real menace, which makes him a lousy nemesis to Elliot.

Who would have thought that in 2016 Pete's Dragon would be a loving family film that brings a tear to your eye on more than one occasion? What David Lowery has done with his film is truly wonderful and a perfect example of what a remake should be...inspired, but original in it's own way.