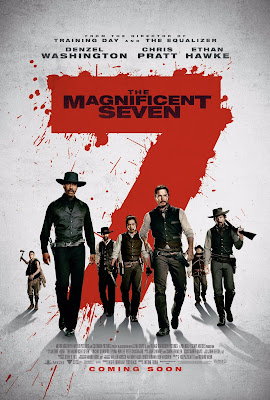 The Magnificent Seven opens in Australian cinemas on September 29 and is distributed by Sony Pictures. Now showing in the United States.

The Magnificent Seven is a throwback to the traditional westerns of yesteryear that ticks all the boxes of what makes a film of it's genre successful. When her town of Rose Creek is taken over by savage gunmen and her husband shot and killed in front of her, Emma Cullen (Haley Bennett) tries to find the right men to bring justice to her hometown. She finds her emancipator in Sam Chisolm (Denzel Washington), who sets out to assemble a group of highly skilled and dangerous men to take on Bartholomew Bogue (Peter Sarsgaard) and his band of men to bring Rose Creek to peace again.

The 2016 Magnificent Seven wears the title of remake loosely, as it doesn't greatly resemble the 1960 film of the same name starring Steve McQueen, Yul Brynner and Charles Bronson that it is based on. This is actually surprising considering how Antoine Fuqua's film is nostalgic as it feel like the westerns of Hollywood's Golden Age. However, as is expected of all remade films with any type of action, it likes to show off what can now be done in the cinematography and special effects department.

And show off it does. There are plenty of impressive sweeping shots of the American west that bring out how attractive it is rather than how brutal. Fuqoa is particularly fond of setting up his cast for hero shots, which usually come when introducing a character or end of the film and are in this case spread out throughout the whole movie. Again, some of these shots are rather impressive such as the seven walking into the sunset (a stereotypical shot for a film of it's genre), but it is more overkill than artistic. 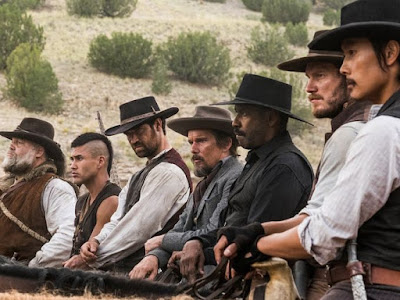 However, the grandest moment of The Magnificent Seven is the fight for Rose Creek. It's battle is exactly what you crave from a western genre film with plenty of action, suspense, unpredictability and heartbreak. The first half of the film (with the exception of the opening scene) coasts along without too much to marvel at, but the promise of and lead up to the final shoot out is superb....and this is no spoiler at all to speak about. The final shoot-out is an accepted piece of a western film, and the plot of The Magnificent Seven lets one know early on that this is where the film is headed.

There isn't too great an attempt of character development for any of the main players besides the basics and what they have done in the past month or so, but each player has a solid and distinctive personality. Despite it being The Magnificent Seven, it is basically Denzel Washington and Chris Pratt being the two of the most magnificence. The two are presented in the film as rock star-like figures and it is them that drive the film. Washington is very good and a real presence on screen as the leader of the seven, Sam Chisolm. His attitude is intriguing and he embodies the cowboy ring-leader with ease and class.

Chris Pratt plays Chisolm's opposite as the mostly intoxicated and laidback, Josh Faraday. Faraday does have many traits that liken him to other Pratt characters in his past movies with his cheeky demeanour and witty one-liners so much that it almost feels as though Pratt was cast purely for comedic value. However, it does work in lightening the mood of the film and giving the screenplay a bit more life. Haley Bennett also does well in the sole female role as Emma Cullen and has several moments throughout the film when she shines.

As westerns do not grace our cinema screens with the consistency which they did in the past, The Magnificent Seven may well be the best of it's genre you see this year. Satisfies lovers of westerns and old-fashioned action.