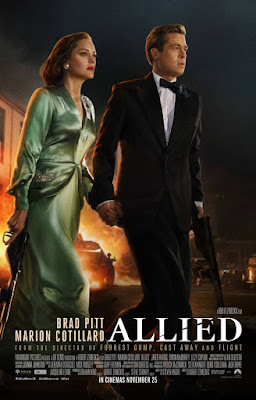 Allied is now showing everywhere and is distributed in Australia by Paramount Pictures.

Robert Zemekis' Allied is undeniably spectacular to look at, but does not have the suspense nor intrigue which such a promising story with it's incredible pairing of Brad Pitt and Marion Cotillard deserves.

The year is 1942 and as the war rages on, a Canadian intelligence officer, Max Vatan (Brad Pitt), arrives in Casablanca to embark on a deadly mission with a beautiful French Resistance fighter, Marianne Beausejour (Marion Cotillard). The two pose as a married couple, but they cannot fight the strong attraction they feel towards each other and fall in love. When they return to England and marry, all is idyllic until Max is told that Marianne is under watch as she is believed to be a German spy. If she is found guilty, Max must be the one to end her life.

Allied looks and sounds like something very exciting. The plot is definitely intriguing and the teaming of Robert Zemekis with Brad Pitt and Marion Cotillard is thrilling. However, something has really gone amiss with this promise. Allied presents a case where the story is better than the screenplay, as it's execution is rather slow and tedious at times. The film is currently being marketed as and really should be a romantic tale that is laced with intrigue and suspense, but is a disappointment as it falls short of this due to the underwhelming screenplay and an unfortunate and rare flat performance by Brad Pitt.

Pitt is capable of far more than what we see here in Allied. His performance is rather lifeless when it should be intense and full of emotion, especially in the face of uncertainty over his love and life. It seems as though Zemekis has directed him this way so that his performance is more subtle than overtly emotionally powerful, but considering how epic the rest of the film (besides the screenplay) is, Pitt should be able to show up. On the other hand, Marion Cotillard gives her consistent best in the role of Marianne and plays the role of the suspected femme fatale wonderfully.

Besides Cotillard, the saving grace of Allied lies in the visual aspects of the production. The film has been drawing comparisons to Michael Curtiz's classic, Casablanca for it's sense of nostalgia and, more obviously, for it's location. The production design by Gary Freeman is fantastic and shows the North African city in the romantic light just right for the film and is especially atmospheric. Joanna Johnston's costume design is absolutely sublime, especially for Cotillard's Casablanca wardrobe. Her design pays homage to classic film starlets and especially that of Ingrid Bergman (Cotillard's Casablanca lunch outfit which is very much like what Bergman wore as Isla in Casablanca).

Allied has been made on a grand and epic scale with a great deal of promise, but it falls short of it's potential with it's lack-lustre screenplay and unfortunate direction.