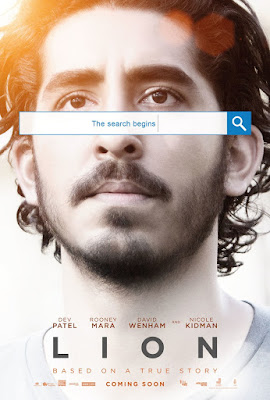 Based on the extraordinary true story of Saroo Brierley, Lion is incredibly moving, heartfelt and rewarding. It embraces it's themes of identity, obsession and family, while also not being afraid to show the raw emotions behind each of these by making the most of it's phenomenal cast.

In a small Indian town in 1986, a young boy by the name of Saroo (portrayed by newcomer Sunny Pawar) boarded an empty train which took him 1900km away from his hometown and his family. After arriving in Calcutta with no way of knowing how to get home, he braved the dangerous streets before ending up in an orphanage and being adopted by Sue and John Brierley (Nicole Kidman and David Wenham), an Australian couple from the island of Tasmania. 25 years later, Saroo (now portrayed by Dev Patel) is haunted by the ghosts of his past despite living a comfortable and happy life in Australia. He attempts to try and find his way home with the help of Google Earth and embarks on a journey that becomes an all encompassing obsession.

Saroo Brierley's story, as told in his 2013 book "The Long Way Home", is so unbelievable and inspirational that it seems as though it was just destined to be made into a movie. For this reason, it would have been too easy for the filmmakers to purely rely on the story to draw emotion and make it work. However, Lion finds it's strength not just from it's story and Luke Davies screenplay, but also from it's beautiful cinematography by Greig Fraser, haunting musical score by Volker Bertelmann and Dustin O"Halloran and the truly remarkable performances by it's cast.

Lion is not afraid to wear it's heart on it's sleeve. It allows the emotion of the story and it's characters to be shown openly and this in turn allows you, the viewer, to feel openly while watching it. You can feel yourself outwardly expressing your sympathy by frowning in pity for little Saroo as he navigates his way through the Calcutta train station. Young Sunny Pawar plays the character with such endearing innocence that he is heartbreaking as well as heart-warming. You return the smiles from the characters on screen with your own and cannot hold back tears when they are also in tears. It is a tremendous achievement for a film to be able to have so much control over it's audience and at the same time, still allow the audience to feel comfortable. 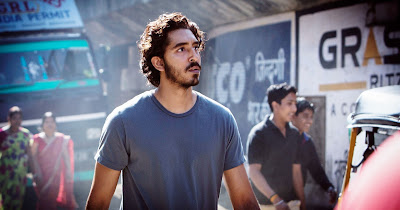 Saroo Brierley's story may not be one which everyone can relate to, but the themes that are at play as part of the film will strike a chord with many. Lion is at it's core about identity. It is not unusual to hear stories about adopted children who wish to find out more about their birth parents and the circumstances of their early life. This is because they feel the longing to find out who they really are and achieve closure in the process, much like Saroo in this case. He is torn between his Indian heritage and his Australian upbringing and feels that by finding his family, he will be able to close that door in his past. This quest to find that missing piece of himself becomes his obsession, as it takes over every aspect of his life. His mind is so preoccupied that he starts to lose himself inside his obsession.

It is during these moments when the obsession with the unknown takes over in the film that Dev Patel truly shines. From his first moment on screen in the Tasmanian waters, Patel is an absolute joy to watch. He completely embodies the young Australian man (with an incredibly convincing accent) who is struggling to find out who he truly is and disappearing into his long restrained pain and torment. Patel is truly magnificent in the final scenes of the film and leaves a lasting impression with his superb performance.

The third theme is that of family, which is seemingly obvious considering the story. In particular, the film looks at the bond between Sue Brierley and her sons, Saroo and Mantosh (Divian Ladwa). Lion is a tribute to mothers everywhere, but in particular to those who have adopted children and love them unconditionally. Nicole Kidman does beautifully in representing these mothers and gives an incredible performance as Sue Brierley.

Lion is an incredibly beautiful and moving piece of cinema that is emotional in the most comfortable, gratifying and uplifting of ways.