The Edge of Seventeen (2016) film review 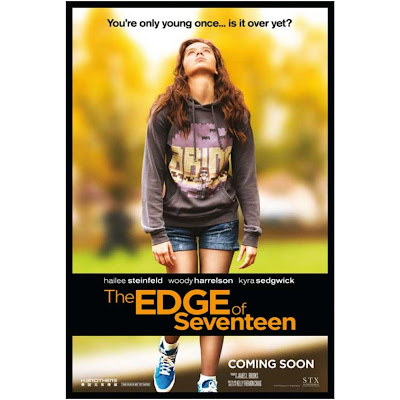 The Edge of Seventeen is now showing in cinemas everywhere and is distributed in Australia by Roadshow Films.

Kelly Fremon Craig's directorial debut, The Edge of Seventeen is the perfect fusion of wonderful, witty comedy and that type of horror you only get by watching someone who is way too much like yourself or past self that it is frightening.

Nobody knows more about the divide between the cool kids and the rest more than high school junior, Nadine (played by Hailee Steinfeld). While her brother, Darian (Blake Jenner) is the blessed sibling who "naturally excels at everything", Nadine constantly feels like the outcast and even more so when Darian starts dating her best and only friend, Krista (Haley Lu Richardson). Of course, she overdramatically disapproves of the match and without Krista by her side, Nadine's problems seem to snowball. She finds unexpected solace in her classmate, Erwin (Hayden Szeto) and teacher, Mr Bruner (Woody Harrelson), but she first must learn how to live with herself before she can tolerate those around her.

The Edge of Seventeen is incredibly character driven and it is these characters along with the entertaining screenplay and fine performances that take the film from run-of-the-mill teen flick to something with a much wider appeal. Hailee Steinfeld gives an incredibly inspired performance as Nadine, the sassy, but painfully narcissistic teenager. Despite her misgivings and unfavourable qualities, she is such an accurate representation of a girl of her age that it is actually questionable if you cannot see fragments of your old self in Nadine.

Watching Nadine brings out the same sort of thought process one would have when watching a horror or thriller, but instead of saying "Don't go through that door" or "Don't go up the stairs", you are saying "No no no...don't do that!" and "Don't say that!". Then comes the horrible realisation that even though you are watching Nadine and thinking how terrible her lack of judgment is, you are really having an out of body experience watching yourself as a teenager. 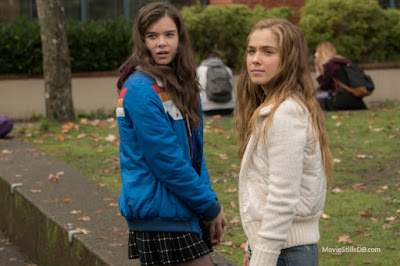 There are plenty of things that come out of Nadine's mouth that will stir memories of things long forgotten for the viewer. For example, Nadine is a virgin and really knows nothing about sex, but talks like she does when she clearly has no idea what she is talking about. Something that everyone will be able to relate to is Nadine saying that she would like to believe that her problems are bigger than everyone else's". From the outside looking in, she sounds incredibly narcissistic, but narcissism is part of being a teenager. At that age, life is so confusing and there are so many new emotions to be felt that it is difficult to understand and grasp the concept that we are not the centre of the universe and that others are feeling similar to us or even worse.

However, one thing that is not quite as relatable and is the one thing we can envy, is Nadine's manner of speech. Her dialogue is cutting, witty and hilarious and this is what gives the film such an amusing edge. Steinfeld shows her wonderful comedic timing in her natural and unforced delivery of this wonderful dialogue and steals and dominates every scene she is in. Her Nadine also embodies the idea that the world views us the way we view ourselves. She see's herself as awkward and tells herself to stop acting so, making it inevitable that she will behave more awkward in social situations.

Despite the film being primarily about Nadine, all of the characters are well crafted and incredibly interesting to watch. What The Edge of Seventeen does so well is that it highlights the imperfections in it's characters, but does not substitute this for their likability. These imperfections merely show that as we grow up, we still never quite figure it all out and that we are never completely rid of bad judgement. This is especially evident in Nadine's mother, Mona (played by Kyra Sedgewick), who one cannot help but feel that she is a bad influence on her daughter. Woody Harrelson's Mr Bruner is far from perfect and is blunt and unrelentless, but still remains a lot of fun to watch.

The Edge of Seventeen is so relatable that it would be frightening if it wasn't so hilarious with it's brilliant screenplay and Hailee Steinfeld's craftsmanship of Nadine.