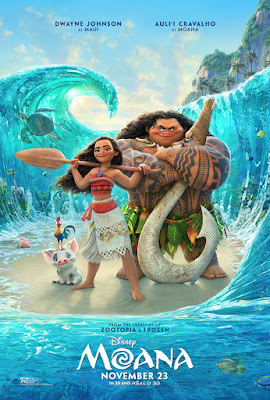 Moana is now showing everywhere and is distributed by Walt Disney Studios.

Disney's Moana is visually exquisite, adorably witty and completely endearing, with a gratifying and realistic view of the ever popular theme of following your dreams.

As the daughter of Polynesian island, Motunui's chief, Moana (voiced by Auli'i Cravalho) is expected to dedicate her life to helping the people on her island in as many ways as possible. However, she has felt a draw to the sea her whole life and as she grows, the pull only gets stronger. When life on Motunui takes a turn for the worse and their food resources start to dry up, her grandmother (Rachel House), tells Moana of a demigod, Maui (Dwayne Johnson) who stole the heart of the island goddess, Te Fiti and without her heart, a lava monster dwells searching for her heart and is the cause of the island's misfortunes. The ocean has chosen Moana to seek out Maui and return the heart to Te Fiti, which would save her island. The journey to do this is not an easy one, but is a chance for Moana to become who she believes she was always meant to be.

Inspired by Polynesian mythology, Moana can be as simple or as deep as you would like it to be, which seems to be a common feature of Disney films in the last decade or so. One of the reasons Disney feature films have remained so popular is that they are widely acknowledged and expected to be enjoyable for both young and older audiences, and Moana is no exception. The story is simple enough on the surface for young audiences to enjoy, but older audiences will be able to understand what the film is trying to say with this warrior princess and her journey.

The character of Moana is representative of that piece inside all of us that is torn between who we want to be and who we are expected to be. It's the hardly original, but still effective message of chasing after your dreams and overcoming your fears that resonates through the film. However, Moana does chronicle the reality of the process of self belief better than other films. We start with wanting to reach a certain goal and neglect thinking about the setbacks that are always inevitable. While we achieve a sense of self belief in order to begin our journey, that belief is likely to be challenged and waver several times and you may have to hit rock bottom before you finally arrive where you are meant to be. The memorable song "How Far I Go" written by Lin-Manuel Miranda works this theme into music beautifully.

It is this representation of self belief as a journey and the construction of Moana's character that make the film perhaps more relatable than most Disney films. Auli'i Cravalho, who voices Moana is the youngest Disney princess as she was 14 at the time of production (she is now 16 at the time of release). Her youth is actually of great advantage to the character as it allows people to identify with her more and the excitement you hear come through her with her dialogue is incredibly endearing. Even the visual aspects of Moana make her more relatable than many of the Disney princesses that have come before her, such as getting her hair stuck in her face when attempting to turn around gracefully. Her chicken friend, Heihei is perhaps the most hilarious princess animal friend Disney has produced, especially considering his first scene involves him trying to eat a rock.

Moana really is incredibly beautiful to watch. The colours used and lighting accompanying it make it absolutely visually exquisite and it completely captures the beauty of the ocean. It really is quite atmospheric. However, while watching the film, one cannot help but feel as though they are seeing similarities between other Disney films. There are remnants of Frozen (and a not so subtle reference when Sven the reindeer has a brief cameo), The Little Mermaid, Mulan and Pixar's 2015 short film, Lava.

Moana is another wonderful offering from Disney that draws on past Disney classics for inspiration, but has a beautiful personality of it's own.