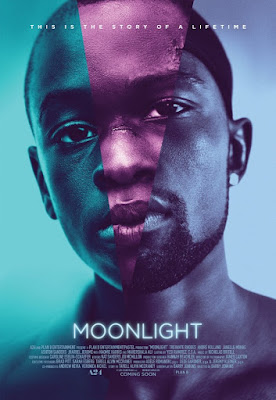 Moonlight is now showing everywhere and is distributed in Australia by Roadshow Films.

Writing about Barry Jenkins' magnificent Moonlight is no easy task.

Moonlight is a stunningly unique and moving coming of age story which is deceptively complex whilst simultaneously being incredibly sweet and simple. It beautifully explores the concept of identity and the ways in which our environment and the people in it shape who we become with incredible performances of wonderful characters by the stellar cast.

The Jenkins directed film tells the story of one boy as he becomes a man and tells his tale in a way that avoids the typical mode of storytelling found in generic coming of age stories. Moonlight is divided into three parts which represent pre-adolescence, adolescence and adulthood and are each titled according to what name our protagonist is called at the time. 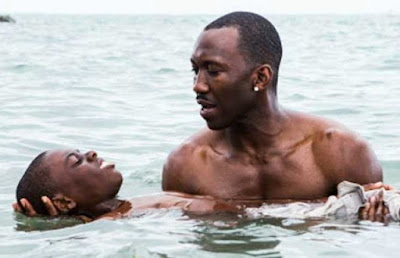 We first meet Chiron, who is currently known as Little (Alex R. Hibbert) as a young boy who is being tormented by bullies and trying to escape. By chance, he meets Juan (Mahershala Ali) who takes him under his wing and gives him sanctuary away from his troubled mother, Paula (Naomie Harris). Even at this young age, Little is showing signs that he may have homosexual tendencies and he tries to make sense of this with the help of Juan.

Part One of Moonlight is a sensational and strong opening to the film and gives us some of the best scenes of 2016 featuring the amazing and memorable characters of Little/Chiron and Juan. The character of Juan, wonderfully played by Mahershala Ali, is so special and it is devastating that he only appears in his fragment of Chiron's story, but this is also understandable and vital to the rest of the film. Ali's performance is incredibly powerful and he is instantly likable, while Naomie Harris' Paula sends waves of pain and torture through you in the best of ways.

The simply beautiful ocean scene is the most important of the film. Not only is it an example of the film's incredible cinematography by James Laxton, but it is where Juan leaves a true impression on Little with the following quote:-

"At some point, you gotta decide for yourself who you're going to be. Can't let nobody make that decision for you."

This is the epicentre of the film. Moonlight is at it's heart about the formation of identity and creating that identity yourself, but outside influences encourage you to make this decision. It is also this scene that the colour blue is discussed ("In moonlight, black boys look blue"). The colour plays a large symbolic part in the film by appearing at moments (in the form of lighting, costume, etc.) which are shaping Chiron as a person and he is making a connection. 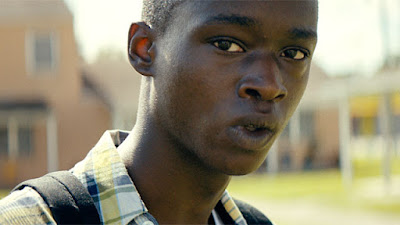 In Part Two, we meet Chiron (Ashton Sanders) as a sixteen year old, who is still being bullied at school for his appearance and his now assumed sexual orientation. His mother has plummeted further into her drug-fuelled haze and Chiron is now more her keeper than she being the strong force in his life she should be. He finds a kindred spirit in classmate, Kevin (Jharrel Jerome) who is the only person in his life to bring him happiness and acceptance. However, a terrible turn of fate results in Chiron's trust horrifically being broken by Kevin and setting off a chain reaction of life-changing events.

Part Two is the weakest of the three parts, but needs to be so for Part Three to be as special as what it is. Watching Ashton Sanders' Chiron in this third is incredibly painful as he struggles to navigate his way through this confusing and torturous time, but there really is this incredible tension you feel as a viewer as you sense him head towards his breaking point. The exact moment when Chiron changes the course of his life is captured in the most confronting, graphic and powerful way that is certainly breathtaking. 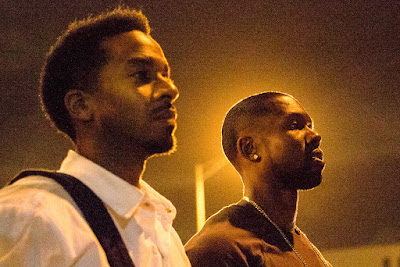 Part Three is the reinvention of Chiron, who is now an adult going by the name of Black (Trevante Rhodes) and unrecognisable with his new, harder persona. He has now become a man of the streets and is very much like Juan, the man he idolised as a young boy. Black has moved away from Miami, but is drawn back when he receives an unexpected phone call from Kevin (Andre Holland).

Part Three of Moonlight is absolutely stunning and emotionally charged. Chiron/Black formed his identity after reaching his breaking point and no longer letting anyone define him. He emotionally shut himself down to everyone in his life, but that barrier is ripped open when he once again hears from Kevin. The scenes in Part Three between Trevante Rhodes as Black and Andre Holland as Kevin are just beautiful. There is so much being said without either of the character's having to use dialogue and the camera picks up on every thought and emotion is exchanged between the two. While Chiron/Black and Kevin are rediscovering each other, it is impossible not to fall in love with the two while watching them.

Moonlight truly is a film like no other and is a sensational piece of filmmaking that restores your faith in love and the human spirit. It is a film that with it's powerful characters and superb cinematography, musical score and underlying themes will not only be greatly studied by film students, but will be loved by cinemagoers for years to come.