Day 2 in LA has been absolutely insane.  Insane in an amazing way.

First thing this morning I went on the Warner Bros Studio Tour. I have been on this tour before, but it was nearly 5 years ago. The great thing about this tour is that no tour is the same. You will never see exactly the same thing and be told the same stories in 2 different tours.  So since the last time I went, I have became a "The Big Bang Theory" fan, I wanted to go again and see why I would see.

While Universal Studios is the first studio that pops to everyone's mind when they think about Hollywood studios as it, of course, is also the theme park, Warner Bros is perhaps the best actual tour. The studio tour at Universal is more of a ride, which doesn't mean it isn't fun and that you don't learn anything, but Warner Bros has groups of about 12 who have their own tour guide who takes them around, part in buggy and part on foot. It is a lot more personal than Universal.

The thing I always notice about studio tours is when they point out something on the set, which you don't recognise to begin with. Then the guide tells you what it was in, such as the park Jennifer Aniston and Lisa Kudrow ran through in "Friends" (yes, the large majority of "Friends" was filmed in LA at the Warner Bros studios and not in New York), and then you recognise it! I had one of those moments when I saw this "jungle" house. 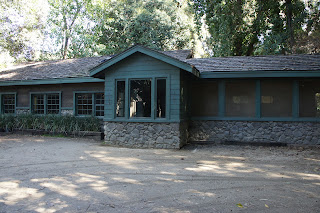 This is Merlottes from "True Blood"! I wouldn't have guessed without Sam, Sookie or Bill out the front!

I also loved seeing some of the sets used in the James Dean classic, "Rebel Without A Cause" and the  museum with memorabilia for lots of old and new movies. There are many costumes from films such as"My Fair Lady", "The Dark Knight Rises" and "Inception". The car museum is also a must see with the space shuttle from "The Big Bang Theory" and the Weasley's car from "Harry Potter". 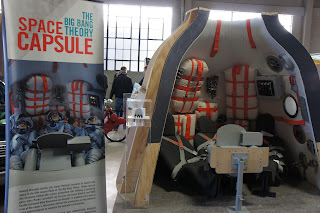 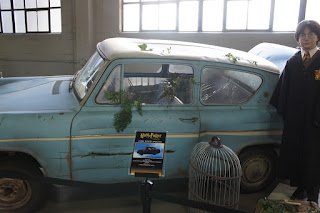 And who could resist having a photo taken on the actual set of "Friends"? 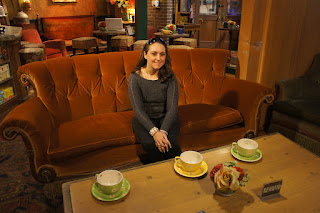 Being a "Big Bang Theory" fan, a little excitement was added to the tour when we caught a glimpse of Johnny Galecki (Leonard) and Kaley Cuoco (Penny) on a break from their table reading!

So it really was a great tour given by Megan, our tour guide. So if you want to see an actual working studio in LA, do Universal for the theme park experience and do Warner Bros for the studio experience.

After the studio tour, I took a trip to Forest Lawn Memorial Park Glendale. I wanted to pay my respects to some of my all-time favourite actors who have left us. The main actor I wanted to see who has left us is James Stewart. I am. A massive Jimmy Stewart fan. He was such a gentleman and a brilliant actor. So I visited his resting pace, which is next to his wife's (Gloria). 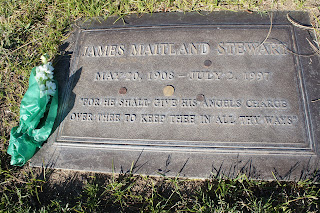 The flowers are from me. I felt I needed to give him a little something for giving me happiness. I also saw one of my other all-time favourite actors, Elizabeth Taylor. Her resting place was incredibly large! It shocked me how large it was! But I am glad it is because she deserves it. I was also lucky enough to go into the Garden of Memory, which is normally locked. This area contains some major old stars, such as Humphrey Bogart and the great Mary Pickford, who's grave is pictured below. 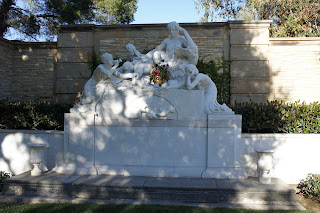 That night I went to see Russell Brand in his stand up at the Largo. This man's stand up is incredible. He is so quick-witted and very,very funny. I admire Russell Brand greatly for how far he has come and how open he is about his past. He knows everyone knows about it and he has nothing to hide. I have met Brand briefly in the past and he is really a lovely man.

It was great seeing him in such a small venue like the Largo. It only holds about 125 people and has a really great atmosphere. It was as though Brand was talking to each person individually in the audience. He was on stage for an hour and 50 minutes and it really was as though he was sitting with a bunch of friends. Fantastic night!
Posted by NP1982 at 12:50 PM