Day 3 wasn't quite as busy as day 2, but still busy in itself!

Today I met up with one of my friends, Stefunny who lives in Los Angeles. Stef moved over here awhile back now from Michigan in order to kick start her modelling and acting career. She's doing very well and her career is only on the up. It was really awesome to see her.

We went to Le Petit Four on Sunset Boulevard. I hadn't been there before, but it is a really nice little restaurant. It's one of th more popular ones I the Sunset Plaza. I have noticed that it is packed every time. I kind of guessed this place was a bit of a celebrity hang out ( as most of This area of Sunset Blvd is). When we were about to walk in, all these people turned around and looked at us. Considering Stef is a model, this didn't surprise me, but she also told me that if you dress nicely everyone looks at you to see if you are famous.

Funnily enough, I ended up sitting two seats away from Australian actress,Holly Valance who was once in Neighbours and has been living in LA since she left the show. Non-Australians may remember her from Entourage as the girl Eric cheats on Kristen with when it turns out Kristen is cheating on him herself. Valance is still as gorgeous as ever.

That night I went to the taping of Russell Brand's TV show, Brand X with Russell Brand. It was a completely different Brand to what I had seen the night before. Although I do watch Brand X at home, it was a strange comparison after seeing his stand up in such an intimate venue the night before. His Brand X persona is more that of a star while his stand up was more that of a friend.

Either way Brand is still hilarious. Always quick witted and he's just a likeable guy. Every if he is somewhat picking on someone, he will always throw in a line to remind the that he is doing so Allen good nature.

The show didn't quite have the daredevil air that the episodes did last season, but that's not always a bad thing for some people. It was good to see a television show screening while I am here. There is so much work that goes into just putting one episode to air and it is an event in itself.

Worst part of the evening, definitely waiting outside in the freezing cold for the show to start. The days may beware in LA, but the nights are freeeezing! 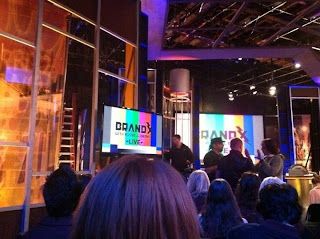 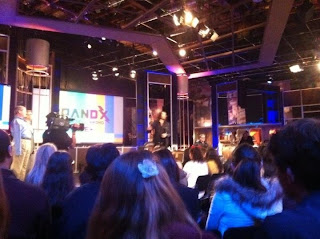 As you are not allowed to take cameras into the studio, my camera had to do for some shots before the show started an after!