Firstly, I don’t often get the opportunity to talk directly to my readers so I am going to take this opportunity to say a huge thankyou to everyone who has read and been part of Movie Critical in the past three and a half years. I am truly humbled by the support and words of encouragement I have received. It has been an amazing journey so far and I am so excited to see what the future holds!

You may have noticed that this year I have been very excited about the 85th Academy Awards which are being held in a little over a week on the 24th of February. It is not an unusual thing for me to be excited about the Oscars. I am absolute nuts about film (obviously) and this is the time of the year where the people who have been at the top of their game in the field I love get rewarded. The fact that I watch these people doing what they love and I review their performances makes watching them get rewarded all the more special to me.

So this year I decided that my Oscar experience was going to be a little different. On the 19th of February, I will be leaving Sydney on a Delta flight and flying into Los Angeles to be there for Oscars week…and I will be taking Movie Critical with me!

This will not be my first trip to Los Angeles, as I have been there numerous times and also lived there for 6 months in 2008 when I studied abroad at California State University Long Beach. Los Angeles is the only place I have ever known as home besides Sydney and I love the place. Being movie crazy, I am completely in my element there. Hollywood is like a massive theme park for movie lovers like myself. I have spent days just wandering around the town searching for hidden pieces of the golden years of Hollywood, as well as basking in the sun of new Hollywood.

This will, however, be my first time in LA while the Oscars are in full swing. I feel like I am going on a pilgrimage to film Mecca!

So I am taking all of you with me! Not literally, but I will be posting each day on Movie Critical my adventures in Hollywood so all Movie Critical fans can live through me!

I have got some very exciting things planned, which I know you are going to love to hear about. I will be staying a night at my favourite place in the world, the historical Hollywood Roosevelt Hotel. This is where the first Academy Awards were held and where many of the old Hollywood stars such as Marilyn Monroe and Clark Gable played. The rest of the time I will be staying in a hotel very close to the Dolby Theatre, where the Oscars are held! 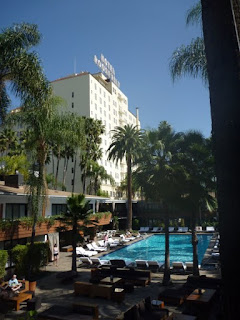 I will be going on the very popular Dearly Departed Tour of Hollywood which takes you to the locations of Hollywood death and scandal. I will also be taking a tour of Warner Bros Studios, as well as seeing a comedy show by a very popular star who has featured in several reviews on Movie Critical!

In a change of pace, I will also be going to a Forest Lawn Memorial Park Glendale. This may seem just a tad morbid to some people, but my main reason for wanting to go is to pay my respects to two of my all time favourite film stars, the great Elizabeth Taylor and James Stewart.

It is going to be a fantastic week. I am so excited to be able to share this week with all of you. Please tell your friends and share Movie Critical with them. My movie reviews won’t stop as a result of this in the next few weeks, as I still have Zero Dark Thirty to review before the Oscars and I will also be making my official predictions for Best Picture, Best Achievement In Direction, Best Actor in A Leading Role, Best Actress in A Leading Role, Best Actor in A Supporting Role and Best Actress in A Supporting Role in the next few days.

I don’t know about all of you, but I am very excited!

Thanks again for all your support!

*All photos are property of and copyright to page owner
Posted by NP1982 at 2:38 PM