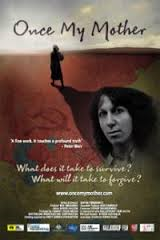 Once My Mother is an incredibly generous offering from Sophia Turkiewicz, who shares her mother's extraordinary story in an extremely effective way by combining her and her family's personal experience with history and using a beautifully personal form of narrative.  Turkiewicz's ode to her mother is exceptionally well made and is as heartbreaking and shocking as it is loving and inspiring. It is a rare experience that opens the doors of an incredible family history and invites all in to witness their pain and triumph.

When Sophia Turkiewicz was only seven, her Polish mother, Helen placed her in an orphanage in Adelaide when they both arrived in Australia. After years of feeling deep hurt and anger towards her mother for her abandonment, she used her skills in filmmaking and the stories her mother had told her over the years to create an understanding of the reasons behind her mother's decision and to reach a place of forgiveness within herself. Turkiewicz comes to a place during her journey where she realises that she may not know her mother as well as what she thought.

Once My Mother exists, as documentaries do, for Turkiewicz to share her mother's remarkable story with the world, but it is more than that. It is a film made out of love, respect and understanding for her mother. The words are all spoken to her mother, as if retelling her life story back to her accompanied by words of her understanding and love. Helen's story is more incredible than fiction and takes place over seven decades in more than five countries. She survived conditions which are unthinkable in their brutality and carried on when others didn't. Her story evokes a great deal of sadness and terror when retelling of the horrors of war that she experienced.

However, Once My Mother is not just about Helen's experiences before she came to Australia, it is a tale of the relationship between mother and daughter. It explores the reasons behind why Helen did the things that she did and Turkiewicz discovers that the things she blamed her mother for we're actually the things she did for her. As is often the case, becoming a mother herself makes Turkiewicz see her mother's actions in a different light and gives her a greater appreciation of her choices. The history of the war which Helen's story takes part during is also explained in great detail and gives the viewer more of an understanding of why Helen endures the things she does and the world is in the state that it is in.

Turkiewicz's creative choices when telling Helen's story add a great deal of power to an already very emotional story. She provides a variety of visual materials which support the subject, all of which are used very effectively. Turkiewicz uses interview footage with her mother from the 1970's and the present, as well as footage from her own films such as Silver City, a screenplay based largely on her mother's experiences. There are also reenactments of Helen's trek's through the snow and in the Polish village. However it is the footage of the actual images from the war and refugee camps that are the most powerful. As Helen describes what happened to her and these other people the images accompanying these words make you realise that these are not just words in a story, this was real life. The words are terrifying enough, but the real footage and photographs are shocking and extremely disturbing. They add a great deal to the overall power of Once My Mother. The footage of Turkiewicz travelling to the places in Poland which her mother used to be is also a wonderful and intriguing addition.

Once My Mother is a rare documentary which brings you closer to it's subject rather than highlighting the distance between you and them. Sophia Turkiewicz's creative decisions increase the power and emotion of the film and it is a wonderful present of love to her mother.