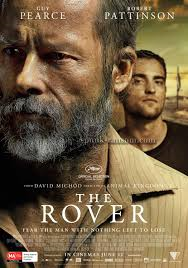 The Rover is part of the Official Competition at the 2014 Sydney Film Festival and was screened on the 7th and 8th of June. For more information, please see the official website.

Incredibly suspenseful, captivating and atmospheric, The Rover is the highly anticipated second feature film by director, David Michod. This extremely tense film is extraordinary by way of it's beautiful and original cinematography and it's minimal, but tight and effective screenplay. Michod's direction of his two lead actors, Guy Pearce and Robert Pattinson is nothing short of perfection with a great deal of character and on screen chemistry between the two. The Rover is incredibly gripping and visually intriguing, yet leaves a great deal to the imagination.

In the Australian outback ten years after the collapse, Eric (Guy Pearce) has his car stolen by a group of three men from right under his nose. He begins the chase in the car the men left behind to take his car back by whatever mean necessary and it becomes evident that beyond his silent exterior is a great deal of anger which makes him a very dangerous man. The car Eric is driving is soon recognised by Ray (Robert Pattinson), the brother of one of the men he is chasing and Eric takes this opportunity to let Ray lead him to his brother and the other men so that he can finally take his revenge on the thieves.

The Rover is a film with a minimal story, but a whole lot going on around and within it. The story itself is not a complicated one or an overly significant one, but it is carried out in a completely original and memorable way. The film is suspenseful and tense from the very beginning and is able to maintain this in it's entirety. While set in the future, it does not fall back into the patterns which futuristic films tend to do. The absence of information regarding the collapse and the reasons why things are now this particular way is problematic for the viewer as there is a thirst to be given answers. Yet, The Rover is not your typical post-apocalyptic film and the collapse is not the focus of the film, it is Eric's tale of revenge that is. The script itself really isn't a very detailed one, but as Robert Pattinson has described it at "Inside The Rover" at the Sydney Town Hall, it is an exceptionally delicate one. Every word is strong, effective and valuable to the film. 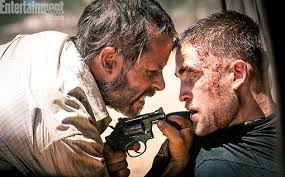 The film is extremely atmospheric by means of it's visuals and musical score. There is a real harshness to the Australian landscape and the living conditions which come as a result of it. The viewer is able to feel the extreme heat of the sundrenched outback and the feeling of being less than clean while travelling through it. With the constant tense story and the dangerous landscape comes a consistent feeling of dread which is also enhanced by a particularly haunting score. The film is also quite twisted in parts, such as when Eric acquires his gun. Yet, as harsh the Australian outback is, the cinematography of it is magnificent. The Flinders Ranges where the film is shot are part of the vast beauty of the Australian outback and are incredibly beautiful on the 35mm film used. The travelling camera shot of the car driving along the seemingly endless road at sunset in amazing colour is the perfect scene.

There is an incredible amount of character development that gradually spans throughout the whole film. The viewer learns more and more about the characters they are watching by means of their actions, emotions and of course their words. Guy Pearce gives a wonderfully controlled performance as Eric. He is a very angry character, but this anger is not shown by emotional outbreaks as such characters in film so often have. His silence accompanied by his evident indifference to his life and his violent tendencies, creates a very scary figure as he is completely unpredictable. Yet he is still not without feeling and still capable of creating relationships, such as with Ray. This doesn't come across in an obvious way and many people will still him as being heartless, but he is a man who is so used to loss that he acts as if he has nothing to lose and doesn't gravitate towards people the way it is suggested he once did. At the "Inside The Rover", Pearce referred to his character as being "an injured and damaged creature". This is extremely evident in the film, as he even see's himself as more of an animal than a human and feels more of a connection to animals, such as dogs than people.

Robert Pattinson gives the best performance of his career thus far as Ray in The Rover. He completely embodies the character by way of speech and facial and body language. His character is a particularly interesting one and unlike Pearce's Eric, he is one who is capable of human relationships despite of his awkwardness. The on screen chemistry between Pearce and Pattinson is fantastic. Their characters both have such different qualities that they perfectly fit together and compliment each other in an offbeat but effective way. The scenes which they have together in which the most dialogue is spoken are very special and it is as though every word spoken is important and really means something.

The Rover is a superb film. It's minimalist story is enhanced in incredible fashion with brilliant cinematography and Pearce and Pattinson's wonderful on screen chemistry. David Michod need not have felt his self-proclaimed "second-album syndrome"