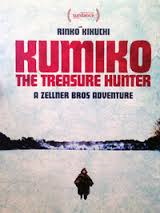 Kumiko, The Treasure Hunter is an incredible story based on real life events with unexpected underlying themes and great depth. Brother's David and Nathan Zellner have written a compelling screenplay which us about the human desire for adventure, but also the desire to prove ourselves greater than others believe we are. With beautiful cinematography that completely captures the emotion of the film, the film takes us from the urban landscape of Tokyo to the rural, snow covered Minnesota while telling an intriguing tale of a woman obsessed.

Twenty-nine year old Tokyo woman, Kumiko (played by Rinko Kikuchi) lives a rather solitary life and finds any human interaction awkward and uncomfortable. She is ridiculed at work by her co-workers, questioned by her boss constantly and hassled by her mother to get married and have children. When she finds a video of the film Fargo hidden in a cave, she believes that the film is real and becomes obsessed with the idea of discovering the money hidden in the town in Minnesota. She finally breaks free of her rut and travels to Minnesota where the real adventure begins.

While Kumiko, the Treasure Hunter is intriguing and a story stranger than fiction, there is a significant amount of depth to it. Kumiko is a girl who is an extreme introvert and seemingly depressed in her surroundings. Her obsession with finding the treasure seems like a hopeless case to anyone watching the film, but for Kumiko it means a lot more to her than just finding the money. It is a way for Kumiko to prove to herself and everyone else that she is more than what she seems. In the film she is put down by her boss, her colleagues and her mother who all believe that she should conform and either have career ambition or settle down and get married. Finding the treasure would mean that Kumiko has achieved something greater than all of those things and  has shown everyone that there is more to her than meets the eye. This is something quite relatable, as it is not uncommon for people to want to show the world that they are more than what they seem. However, it is uncommon to go to the extremes that Kumiko did in order to prove this. Kumiko's obsession stems from her obsession with the film, Fargo. Her obsession with the film here is to the point where it is actually unhealthy, but the film provides an escape for her from her everyday life which is something cinema aims to do. A film should transport you away from your life for a few hours and then drop you back at the end. Kumiko takes this to another level where she obsesses about the film and her obsession consumes her as she starts to live her life as though she is in the movie. 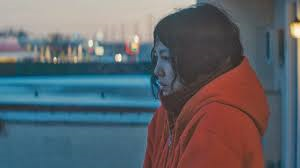 The first and second halves of the film are so different that it actually feels as though Kumiko, the Treasure Hunter is two films in one. The first half of the film is of Kumiko's life in Tokyo, while the second half is her adventure in Minnesota. The two locations couldn't be more different and this also goes for the feelings evoked in both places. In Tokyo, Kumiko's awkwardness and unhappiness is all encompassing and this takes it toll on the viewer. The urban landscape of Tokyo is a complete contrast to that of Minnesota, but the way in which it is shot is just as interesting. Visually, the city does not come across as a happy place which is largely influenced by Kumiko's state of mind. With the exception of her dancing neighbours and giggly co-workers, the city does not promote an air of happiness and is rather tired and overworked.

While when she makes the flight to Minnesota and starts on her journey to Fargo, the sense of adventure sets in and suspense and intrigue follow. Her journey to Fargo is interesting in that it also exhibits the culture shock which Kumiko feels. Not only this, but the way in which the people she meets along the way deal with the challenge of interacting with someone who is from a different culture, such as the policeman taking her to a Chinese restaurant searching for someone who speaks Japanese. The rural landscape is exquisite. The whole time Kumiko is in Minnesota it is covered in a blanket of snow and although the wilderness is dangerous and confronting, it still looks beautiful and longs to be explored.

Rinko Kikuchi carries the film wonderfully. She is very convincing as the painfully awkward, shy and unhappy Kumiko. She completely embodies her awkwardness with the delivery of her dialogue and her physical stance. Her moments of brilliance come when Kumiko allows herself to let go and lets her emotions overcome her. Though Kumiko's depression and adventurous ambition are well constructed, her character's background is not quite so much. The first half of the film can be at times rather frustrating as we are introduced to Kumiko and her feelings in the present, but we are told nothing of her past. There must be a reason she has become the way she is, as it is suggested in the film that she wasn't always that way, such as how she moved out of her mother's home which would have taken some sort of ambition and her mother wouldn't be expecting her to have a boyfriend or get married if she knew how awkward and depressed her daughter really was.  There is a longing to understand Kumiko and why she is the way she is, as nobody becomes as depressed and isolated as she does at 29 without something happening to make them that way. The film also neglects to tell us how she came to be led to the cave in which she found the Fargo video.

The story of this girl who travelled from Japan to Minnesota in belief that the Coen brothers film was real is one so incredibly bizarre, but one which you feel you simply must see on screen to enjoy and be intrigued by. Kumiko, the Treasure Hunter challenges your mind in ways you would not have suspected beforehand..