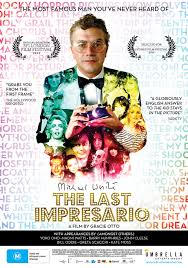 Society loves the famous, and The Last Impresario gives society the opportunity to love the most famous man you have never heard of. Gracie Otto pays tribute to the incredibly crazy but brilliant life of English producer, Michael White in a documentary which is like the man himself, the life of the party.  Exceptionally well researched and constructed with a whole lot of love and care, The Last Impresario is a great deal of fun and allows you to gate-crash the party that is the life of Michael White.

When Gracie Otto was at a party at the Cannes Film Festival in 2010, by chance she met Michael White, a man who everyone seemed to know and wanted to speak to. She soon found out about the incredible life that White has led and the extraordinary people who he befriended along the way. White was the producer who bought such scandalous stage productions as Oh! Calcutta! and The Rocky Horror Picture Show to life, and also such film productions as Monty Python's The Holy Grail and numerous other successful productions. He helped shaped the culture of 1970's London and in doing so created a circle of celebrity friends, many of whom are interviewed throughout the course of the film. 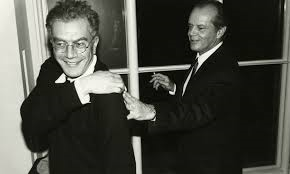 Gracie Otto's portrait of Michael White is constructed evidently with the love and care which is employed when the director truly cares for their subject. The Last Impresario is an incredibly respectful piece of work, which is a fitting tribute to a man who is ultimately a very private despite his high profile. The audience goes from not knowing who Michael White is to 85 minutes later feeling like they have known him for years. He has indeed led an incredibly interesting and intriguing life and from the very beginning the audience becomes addicted to White's lifestyle and has the thirst to be pulled further into his world by way of the film. While White himself may not be especially talkative or open about his private life, a great deal of his life story comes from over 50 interviews Otto conducted with White's friends and family for the film. Among the interviewees are Kate Moss, Anna Wintour, Naomi Watts, John Cleese, Yoko Ono, Nigel Planer, Barry Humphries and John Waters. An incredible amount of research went into the making of The Last Impresario to create an accurate and complete portrait of the man. It is also quite touching to see White grow older, but often saddening how he is miserable in the realisation that he is not the man he used to be.

The Last Impresario has an overall very fun atmosphere. It really captures the essence of the lifestyle that White has led over the past few decades and makes the audience feel as though they were part of his life in the 70's, 80's and 90's. The film opens with a luxurious shot of Michael in Cannes and then follows with an encounter he and Otto have with Rolling Stones front man, Mick Jagger. With these two shots the scene is set to experience the high life in the way White does. There are so many ways in which the audience can indulge in the celebrity culture White is and was part of over the years through photographs, news clippings (which are displayed in the most intriguing fashion using some impressive cinematography), interviews and archival footage of both White and his projects, and also other historical images to indicate the culture of the times. White has had a life which many would be envious of, but this film allows them to feel as though they really were part of it.

The Last Impresario is a fascinating look at an intriguing individual who everybody wants to be friends with. An incredible amount of fun and a beautiful, atmospheric journey.