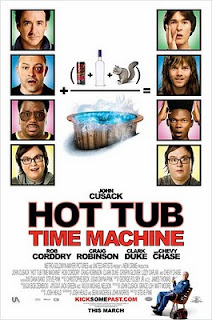 In My Own Words
I remember the first time I heard about “Hot Tub Time Machine”. My fiancé and I went to the Arclight Cinema in Hollywood in February to see “The Wolfman”. When the preview for “Hot Tub Time Machine” came on, we look at one another at one another with our “You have got to be joking” looks. Let’s look at the concept for a moment. A group of guys go away together, jump into a hot tub and get transported back to the 1980’s. Come on. What a ludicrous concept. Judging a movie by its title, you would have to think that people are running out of ideas for films. However...after I have seen the film, it reminds me how good scriptwriters can make even the most ridiculous ideas work on screen. I was pleasantly surprised. So I give a huge thumbs up to the writers, Josh Heald, Sean Anders and John Morris, for making “Hot Tub Time Machine” work.

One thing that I really enjoy about being a reviewer, is seeing how audiences vary across different films. A couple of weeks ago I was watching “The Last Station” thinking how at 27, I was definitely the youngest in the audience. Today, I thought I was going to be the oldest in the audience. Funny that considering the film is rated MA15+ here in Australia. I’m positive that there were some young boys in the cinema that were not 15 yet. Friday night at the cinemas is an interesting night. All the rowdy school kids come out to play and the boys love yelling things out to make the others laugh. There is always a pattern to this too. They start off in the previews and everyone laughs, 15 minutes into the film when they do it again they get told to where to go. There comes a point in time when their rowdiness, which starts off being funny to their peers, just becomes annoying to everyone else. I can’t help but just sit there and giggle. Was I ever like them? Surely not.

Review
“Hot Tub Time Machine” wins most ridiculous movie title of the year, but could also win the biggest surprise packet of the year. Like the title, it is very silly, but it is also fun, funny and entertaining. Not everyone’s type of humour, but much funnier than the majority of films in the same genre of humour that this film belongs in. The film begins with the coming together of old friends, Adam (John Cusack) who has just broken up with his wife, Nick ( Craig Robinson) who is not the pant wearer in his relationship and the out of control troublemaker of the friends, Lou (Rob Corddry). They decide to relive old times and go up to Kodiak Valley and take Adam’s nephew, nerdy Jacob (Clark Duke). After arriving and finding that things are definitely not as they left them, they retreat to the hot tub, which has amazingly started working after it was plagued by dead animals when they arrived, for a night of binge drinking. They awake the next morning to find everyone wearing fluro and listening to walkmans, all pointing to the fact that they have gone back in time to the 1980’s. Now they are all able to go back and do the things they have always wanted to do differently, or will they?

If you go into “Hot Tub Time Machine” expecting it to be ridiculous and gruesome, you will be pleasantly surprised. Truth being told it is not going to win any awards and is not the best acting performances by any of these performers. You will definitely get the most out of this film with the lowest expectations. However, it is a great story of friendship and a reminder of how you should make every moment count as, unlike in this film, people are not able to go back and recreate those moments that make your future. Pretty in depth for a film by the name of “Hot Tub Time Machine”. It is very well written and the director, Steve Pink, and the writers have made not a bad film out of a very silly concept, which signifies a job very well done. There are still some very silly moments and there are many things that just don’t make sense. Some people may see this as one of the funniest movies of the year and it may well be the funniest film of the year for people who like this sense of humour, while other s will still see it as completely ludicrous and in some parts, completely revolting. In other words, it does depend who you are and what your sense of humour is as to whether you will like this film.

Whether you are into this type of humour or not, there are undeniably some very funny moments. John Cusack’s, Adam is probably the least funny out of the characters, yet Cusack still has that likable persona. Lou, played by Rob Corddry, can be extremely vile at times, yet does give some of the great one liners of the film. Perhaps one of the funniest parts of the film is the one-armed Phil and the way he is incorporated into the film is very clever.

“Hot Tub Time Machine” is a lot of fun silliness. However silly it may be, it is not nearly as silly as what a movie with this concept could be. Definitely a funny film and very entertaining from start to finish. Just take this film as what it is, don’t expect to see amazing visuals or fantastic acting, just watch it to have fun, have a laugh and to relive some great 80’s music.
6.5/10